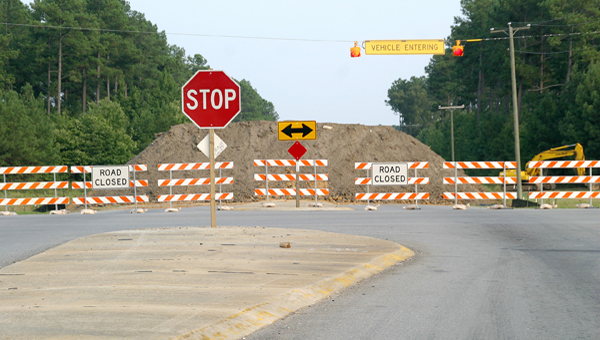 NC DOT has promised to make improvements to the NC 11 & 11 intersection near Ahoskie, to include removing the barricades and dirt mound. Instead, the new barriers will be more pleasing to the eye. File Photo by Cal Bryant

WINTON – Zero: that’s the number of traffic accidents at the NC 11 & 11 intersection since NCDOT made major changes there in August of 2010.

While that news was welcomed by the Hertford County Board of Commissioners, that group has been extremely vocal about the current aesthetics of the intersection located north of Ahoskie. It now appears that the state has plans to make that intersection more appealing to the eye.

At their mid-month meeting, the board heard a report from DOT Division I Engineer Jerry Jennings about the 11 & 11 intersection, the scene of 37 accidents, to include two fatalities, in the five years prior to the change from a crossroads to a “T” intersection.

Prior to that changeover, DOT attempted to lower the number of accidents through the use of different signage arrangements, warning flashers and site vision improvements, but those efforts failed to accomplish the intended goal.

“The accidents there in the past did not involve motorists running through the stop signs, nor did they involve motorists making left or right turns there; they were cases of where motorists stopped and then pulled into the path of oncoming traffic,” Jennings said.

Jennings stated that the severity of the crashes at 11 & 11 were heightened by the fact of the speed on the highway (55 mph) and the volume of big truck traffic. He added that DOT studied placing a stoplight at the intersection, but the traffic volume did not meet the federal criteria.

“An interchange would be the best solution there long term, but we all knew that wasn’t going to happen quickly and we needed to do something in the interim,” Jennings said.

What DOT finally did there involved placing a mound of dirt and barricades on the east side of the intersection, thus preventing traffic from directly crossing over. Instead, that traffic was rerouted, using NC 11 and Modlin Road or NC 11 and NC 561.

“We know that this board was not supportive of that change,” Jennings noted. “We agreed to make those changes temporary and evaluate the performance of those changes at the end of one year’s time.”

Jennings said that based on these results, DOT is recommending to keep the current traffic pattern in place and make a number of aesthetic and operational improvements to NC 11 & 11. He said in the short term, DOT is planning on removing the mound of dirt and barricades.

“We will landscape the intersection, place a small berm there and resurface the pavement – it will look like a whole new intersection,” Jennings said. “It will look a lot better than it does now.”

He said that project could begin as early as late February or early March and could hopefully be completed by mid April, contingent on the weather.

In the long term, Jennings said it was a real possibility to expedite an interchange at that intersection. He said a new project added to the state’s seven-year road improvement plan includes four-laning US 13 (and NC 11 further south) from the US 13/US 158 intersection in Winton to the NC 561/NC 11 intersection (near the Ahoskie Inn).

“That project isn’t funded in our plan until 2019, but I think there’s a real possibility that we can pull the interchange component at the 11 & 11 intersection, move it way ahead and pursue it in a three-to-four year window,” Jennings said. “I think it’s feasible to have an interchange there within four years while the rest of the project is still progressing.”

Commission Chairman Curtis Freeman said the biggest problem he had with the manner in which the changes were made at 11 & 11 was that DOT made the decision to do so without meeting in advance with the local board.

“Can we simply ask that the Department of Transportation be a little bit more informative in the future before decisions of this magnitude are made,” Commissioner Bill Mitchell asked of Jennings.

“I agree that we could have done a better job of communicating,” Jennings answered.

Commissioner Johnnie Ray Farmer asked Matt Wood, the Division 1 representative on the State Board of Transportation (who attended the Jan. 17 meeting in Winton), to support the interchange and move it up on the DOT’s list of road improvements.

WINTON – Hertford County Public Schools will potentially be part of a $15 million grant through the North Carolina New... read more