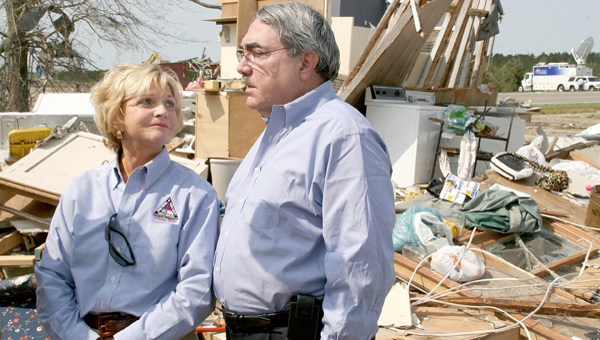 Gov. Bev Perdue is pictured here with US Congressman G.K. Butterfield as they tour damage near Colerain in the aftermath of last April’s deadly tornado. File Photo by Cal Bryant

The incumbent Democrat announced Thursday she has decided against seeking a second term in office. She will become the first governor in North Carolina history not to serve a second term since the ability to seek office for more than one term was added to the state constitution in 1980.

“The thing I care about most right now is making sure that our schools and schoolchildren do not continue to be the victims of shortsighted legislative actions and severe budget cuts inflicted by a legislative majority with the wrong priorities,” Gov. Perdue said Thursday. “Therefore, I am announcing today that I have decided to not to seek reelection. I hope this decision will open the door to an honest and bipartisan effort to help our schools.”

She said running for reelection at this time would continue to be disruptive rather than allowing her to focus on the job she holds.

“A re-election campaign in this already divisive environment will make it more difficult to find any bipartisan solutions,” she said.

Perdue was elected governor four years ago after serving as lieutenant governor for eight years. She also served as a state legislator and was a teacher before that time.

One of the most visible governors in the Roanoke-Chowan region, Perdue visited on many occasions including tragedies such as the April, 2011 tornadoes that struck in Bertie and Hertford counties.

She was thankful for those who supported her during her political career.

“To those of you who have supported me throughout my years of public service, I will always be grateful for the confidence you have placed in me,” she said. “In my remaining months in office, I look forward to continuing to fight for the priorities we share, by putting North Carolinians back to work and investing in our children’s future.”

The response to Governor Perdue’s decision came in swiftly from Democrats, Republicans and others throughout North Carolina and the country.

“Gov. Perdue will leave a long legacy of public service in this state,” Rep. Wray said. “She is a champion for education and our military in the legislature and in the executive branch. She helped lead the state through one of the worst financial crises our nation has known.

“I will continue to work with her to improve education in North Carolina during the rest of her time in office and I wish her a well-deserved retirement.”

“Governor Perdue deserves the state’s sincere gratitude for her many years of public service,” she said. “During times of extraordinary economic stress and budgetary pressures, she continues to vigorously pursue priorities near and dear to the hearts of generations of North Carolinians, including expanding and improving education at every level and a tireless pursuit of new businesses and jobs for the state.

“I am especially heartened to hear she will devote her remaining time in office fighting to ensure that the children of North Carolina receive the affordable, quality education mandated by our state constitution.”,” Hagan added.

“Governor Perdue has had a long and dedicated career in public service in North Carolina,” he said. “All too often, the sacrifices of public officials go unnoted, so I acknowledge her hard work and her years of service to this state.

“Whether we agree with her politics or not, we all should respect her for her commitment to North Carolina over these many years,” Tillis added.

He said the two would work together in the remaining time Perdue serves North Carolina.

“Republicans in the General Assembly have disagreed deeply with the Governor over many issues, but I am hopeful we can find opportunities in her remaining time in office to work on legislative matters that will become part of her legacy, and do so for the good of all North Carolinians,” he added. “I wish Governor Perdue and her family the very best.”

The Rev. Dr. William J. Barber II also released a statement on behalf of the North Carolina Chapter of the NAACP.

“Governor Perdue is a stalwart friend of justice,” he said. “With her strong voice and her steady veto pen, she has stood on the side of justice against the frontal assault against minorities’ rights by the ultra conservatives in the General Assembly. She has taken seriously her oath to uphold the Constitution, which requires those in government to govern for the good of the whole, to protect and strengthen public education, to create economic vitality, to protect civil rights, to ensure equal protection and racial justice under the law.”

Mere moments after Perdue’s announcement that she would not seek another term in office, speculation began about the possible Democratic candidates.

Lt. Governor Walter Dalton announced Thursday he would seek the office (see story , page 3A). Others who have been mentioned as possible candidates include Congressman Brad Miller, who announced earlier this week he would not seek reelection and State Representative Bill Faison, former State Treasurer Richard Moore and former White House Chief of Staff Erskine Bowles.

In a statement to the News & Observer in Raleigh, Cowell said: “I intend to seek reelection as state treasurer. In a year with so many unknowns, the most valuable role I can play is ensuring the stability of our state’s finances and continuing the important work of the office.”

“I am honored to serve as Attorney General and plan to file for reelection for that office to continue my work keeping people safe and moving North Carolina forward,” he said in a statement.

The only possible local candidate was Wray, who is among his party’s leaders in Raleigh. He said Friday he is not planning to seek the Democratic nomination, but is certain his party will have a good candidate for voters in the fall.

“I remain confident that the Democratic Party will have a strong candidate in the general election and have not yet decided who I will support if there is a primary election,” Wray said.