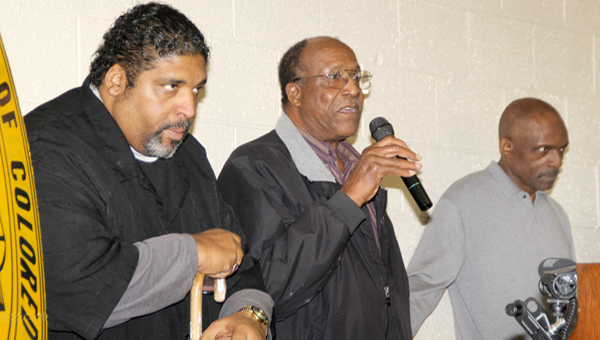 WINTON – Poverty has a face and it needs to be seen and heard by those implementing political policy.

That was the purpose behind the first leg of the “Truth and Hope Tour of Poverty in North Carolina” in an effort to hear the voices and see the faces of poverty in rural counties and inner city neighborhoods.

The tour made a stop in Winton on Friday morning, part of a swing through eastern North Carolina that included visits to Washington, Roper, Elizabeth City, Scotland Neck and Rocky Mount.

“We met and talked with parents who can’t afford healthy food for their children, homeless men without a place to sleep, and a host of people who struggle to meet even the most basic needs,” said Rev. Dr. William Barber II, President of the North Carolina NAACP. “No one can look at these faces and not agree that we must begin the long, hard, necessary and righteous work of changing this harsh reality for the good of the whole in our state and nation.”

The North Carolina NAACP, NC Justice Center, UNC Center on Poverty, Work and Opportunity and the Institute For Civic Engagement and Social Change at North Carolina Central University departed from Raleigh on Jan. 19 with a bus full of activists, reporters, foundation leaders, and scholars. All totaled the group visited six communities during this leg of the trip.

“We know there are people right here in Hertford County that are still having to go to outhouses in the 21st century. What we’re trying to do is put a face on this, our elected leaders need to see what’s going on and make sound decisions to help these poor people instead of catering to the rich,” Barber said while in Winton.

“We need folks to speak truthfully about the problems of poverty. We cannot shift things until we put a face on them, until we tell the truth,” he said.

“Maybe if we take the blinders off, force folk to see, we can develop a Marshall type plan for North Carolina,” Barber noted. “Maybe we can get serious about lifting families out of poverty. Maybe we can get the point across that we need to lift those at the bottom if the whole state can prosper.”

Gene Nichol, director of the UNC Center on Poverty, Work and Opportunity, said poverty is a wound on the human heart.

“We hear all the talk about the common liberty for all and the foundational commitments to all, but all that talk yields little reality for all,” Nichol stated. “We are the richest nation on earth, but yet we allow much higher levels of poverty than other industrialized nations allow. We have the largest gaps between the rich and poor in our history.

“As damning as those numbers are, in some ways they miss the point,” Nichol continued. “They do not reflect the reality of the burden, the barrier, the indignity which is visited in people’s lives. Our goal is to turn those numbers to reality. Our goal is to move this discussion from the quiet rooms to the people of North Carolina.”

Nichol put a face on poverty as witnessed by tour members in Elizabeth City where there are very few beds for over 1,000 homeless individuals; towns and counties fighting for water and sewer improvements; people having to travel 20 or more miles to find the basic necessities of life; unavailability of credit to make simple home repairs; rising tuition rates; and educational cuts that, as he stated, “mock our commitment to education.”

As part of the tour, video cameras were rolling at each stop. Barber said those faces and stories recorded by the cameras would be used to put together a documentary film.

On Friday in Winton, several local citizens told their story of poverty. Among them were Anthony Smallwood of Lewiston, who lost his job in 2009; and Teresa Perry and her father, Leon Raynor, both of Colerain who lost everything during the tornadoes of April 16, 2011.

“I want to do better for myself, I want to work,” Smallwood said.

He said there was a need for more public housing in the local area. He is currently renting a mobile home for $550 per month.

Perry lost her husband and her aunt in that tragic storm. She was seriously injured and still has to use a walker for mobility.

“I still have to go to the doctor every week; my medical bills are so high that I can’t pay them,” Perry said.

She and her family did have their home rebuilt by Samaritans Purse. Their original home was not insured. Perry said that was the case for many she knew…having to use what little money they had for the basic necessities rather than purchase insurance.

Thomas Langston, a Gates County businessman, told the story of a 70-year-old woman in his county that remains employed to survive.

“She drives a school bus, morning and afternoon, every day to help pay the bills,” Langston said. “Her husband had a massive stroke. She gets up in the morning, fixes his breakfast, goes and then drives the school bus. She does that every day.”

Langston said that despite having a job, one with no benefits, the woman is behind in her bills. He added that her home was in need of repair.

“The county has kicked against things like this,” he alleged. “We have teachers that work in Gates County, but have to live in Hertford County or Pasquotank County or Perquimans County because we don’t have living facilities.”

Langston added there were many homes in the county without indoor bathrooms.

Jen Beckwith of Colerain, a church missionary, said those locally cannot see the face of poverty because they cannot see inside these homes.

“We have those who have been without jobs for four to five years,” Beckwith said. “They cannot find adequate housing, but still have to raise their families. We have some that cannot pay their heating bills, so they do without.”

Beckwith also pointed out a lack of available beds at local nursing homes. She said most have to leave the area, and their families, to find a nursing home in which to live out their remaining years.

Brenda Greene of CADA said it was hard on her and her staff to find solutions to help those who do not qualify for the programs offered by the organization.

“There are many in our area that need help, we see it all the time, especially in foreclosures, but there are those who, through no fault of their own in losing their job, cannot make payments,” she said. It’s hard here in our four counties. We do what we can to help, but with us being a non-profit our funding is limited.”

Greene added that some federal assistance programs were drastically reduced or totally eliminated, making it that much tougher to locate funds to assist those in need.

“We need jobs, all types of jobs,” Stephenson said. “We need hope.”

Myra Poole of Roanoke-Chowan Community College said programs were offered there to help those who have lost their jobs in one line of work and could train to transfer their skills to another type of job.

“We cannot turn this around unless our entire state gets serious about targeted investment and job recruitment,” Barber stressed, “especially here in northeastern North Carolina.”

Former Ahoskie Mayor Linda Blackburn said the rural counties of the state have to follow the same rules and regulations for job recruitment as the bigger, more wealthier regions.

“We can’t compete in eastern North Carolina,” Blackburn said. “We need to stop looking at everyone in the same swipe of a brush. We here in the rural areas have different needs than the urban areas. We have profound needs in our local communities that have not been addressed.”

Barber addressed that issue by relating it to running a 100-yard dash.

“You can’t win when others are allowed to start at the 50-yard line and when you don’t win they say you aren’t trying hard enough,” he stated.

Blackburn also noted that the local food pantries are seeing individuals and families coming in record numbers due to the current economic downturn. She added that funding was being cut for food and nutrition programs as well.

“What we’re seeing now are agencies that never were properly funded to begin with and being defunded even more,” Barber said. “The problems that we’re seeing just didn’t start in 2008. It’s important to talk about the problems we had years ago that still haven’t been corrected.”

WINTON – The Hertford County Board of Commissioners unanimously agreed to enter an option agreement that may lead to the... read more