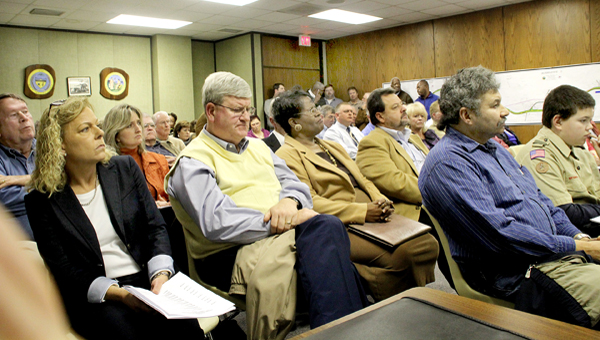 A standing room only crowd filled the Hertford County Commissioners' meeting room Tuesday night to see what the next move the board members would take regarding the placement of the new county courthouse. Staff Photo by Cal Bryant

A third voice encouraged the county’s leaders to slow down and further study this much-debated issue.

Ernie Evans, Hal Daniels and Brien Lassiter used the public comments portion of the Hertford County Board of Commissioners meeting to state their opinions on the issue of moving the courthouse construction project out of the traditional county seat of Winton.

“The decision you will make in regards to the relocation of the county courthouse, and with that the county seat, is a decision that is far reaching, much more important in my opinion than simply the decision to build a new courthouse,” said Evans, an Ahoskie resident. “That decision has been made; you’ve been unable to reach an agreement with the town of Winton. You are negotiating with a landowner for a site near Murfreesboro.

“The primary reason, if not the sole reason given for the selection of that site was price,” he continued.  “As a taxpayer, I’m here to say to you that if that is your sole reason for choosing that site, that’s very shortsighted on your part. The difference in price between the Ahoskie-Union area site and the Murfreesboro site is some $125,000 to $130,000. On a 7, 8, 9 million dollar project, that’s a very small percentage. When you add to that the long-term impact of this decision, that amount of money is really not very important. I think you are making an unwise decision if that’s the basis of your decision. If price is not the basis of your decision then you need to tell the citizens the reason why.”

Evans asked the board members to look for a more centralized location for the courthouse and the site of the county seat.

“Please consider the long-term impact of this decision and not just the short term. You need to realize that the citizens of the county need to come first. They need to have input into where the courthouse and county seat is located.

“My desire is that you should suspend these negotiations for this particular site and look further. If you choose not to do that, I would encourage you to listen to other alternatives. I’m not here advocating the (Stuart) Pierce property (near the Ahoskie-Union area) so much as I am a site in the Ahoskie-Union area that would be closer to the population and commerce center of the county.”

Evans closed by saying that he did not want to see the legacy of the current board of commissioners be linked to being “cheap” in their decision to relocate the courthouse and county seat.

Daniels, also an Ahoskie citizen, provided the commissioners with a fact sheet, one that gave Hertford County population by zip code and traffic data from NCDOT. Daniels’ information sheet showed Hertford County with a population of 24,699 (according to the 2010 US Census), of which 12,007 live in the Ahoskie zip code. His data also showed the busiest intersection in the Ahoskie area (US 13/NC561) had a daily vehicle count (13,000) that was more than double that of Murfreesboro’s most traveled road (6,300 along US 158 Business).

“If the county courthouse is to be relocated, all these facts need to be considered,” Daniels said.

He continued, “I personally believe that the courthouse needs to stay in Winton, our county seat since 1766. I believe that if cool heads and lower tempers could prevail, they (county commissioners and Winton Town Commissioners) could get together and this issue would be different than it is today. They can resolve these issues.

“But if the courthouse is going to be relocated anyway, there’s a better option,” Daniels added. “There’s a more central location with natural gas nearby, with water and sewer already in place, has more traffic count….so many reasons for this site rather than a corner over near Murfreesboro.

“I request that the Hertford County Commissioners rescind their recent vote to relocate the courthouse near Murfreesboro until all the facts have been presented for all parties, including Hertford County taxpayers,” Daniels said. “After all this information has been disseminated, a public referendum should be held to get the feelings of the people who you represent. Moving a courthouse is just too big of a decision and will affect too many people for now and for years to come. Consider a central location that’s more convenient for everyone. This is a decision that should not be made by a group of five people without public input.”

Lassiter admitted his comments were based more on the fact that he was a Hertford County citizen, not just as the mayor of Ahoskie.

“I’m not advocating that you need to put the courthouse near Ahoskie,” Lassiter stated. “The main thing I want to see you do is slow down the process. It’s been a five-to-six month process (to date), but Hertford County got to where it is today in 246 years.

“I’d like to see you bring a vote to the citizens; the vote you took (to relocate to Murfreesboro) was a split vote,” Lassiter added. “I think the citizens of this county could have swallowed this a little bit better if your vote was unanimous, but it was a 3-2 vote. You serve together, you stand together, it would have been nice to see a 5-0 vote. Don’t bear the burden alone; give us a chance to help you make that decision. Don’t make a hasty decision that one day you’ll look back on and say we should have done something different. I’m asking you to rescind your earlier vote.”

Charles “Chuck” Revelle, legal counsel to Hertford County local government, commented on two legal matters he noted during the public comments. The first dealt with the publication of a legal notice dealing with the site selection of the courthouse (and thus moving the county seat).

“We’ve been through this when this process started,” Revelle said. “What was done at the last meeting (Jan. 3) was the selection of the site. You approve the negotiation with the landowner for that site. This is an option agreement, it’s not a contract to purchase property. You want to lock in the landowner so the landowner cannot change the potential terms they initially offered.”

Revelle said the option agreement gives the county 120 days in which to perform their “due diligence.” That includes title examination, utilities and environmental issues.”

He said the second issue concerned the call for a voter referendum on where to place the courthouse. Revelle said advisory referendums are not permitted under North Carolina law.

“We can only hold elections for specific purposes and this (courthouse/county seat relocation) is not one of the specific purposes,” Revelle explained. “You can have all the forums you wish to hear citizen input, but you cannot hold an advisory referendum unless the (state) legislature passes a local act authorizing you to hold a referendum on that question. You can request the legislature do that, citizens can request their legislators to do that, but the absence of a local act prevents you from authorizing to spend public funds to hold an advisory referendum.”