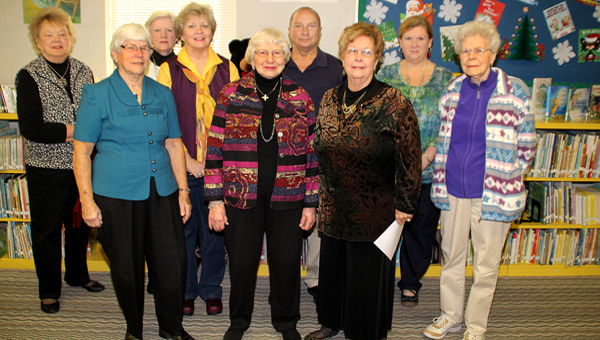 AHOSKIE – Anne Tucker may be leaving Ahoskie, but the legacy she built here over 50 years will remain forever.

On Friday, Tucker was remembered for her true community spirit when members of the Thursday Book Club cashed in a CD and donated $2,500 in her honor to the Ahoskie Public Library’s Building Fund.

Tucker, along with her husband, Tommy, are retiring to Tarboro at the end of this month. She leaves behind a half century of volunteerism in the Ahoskie community, to include the active role she played in the Thursday Book Club.

“This is certainly a fitting tribute to Anne Tucker, the member with the most years of service on the present day Thursday Book Club,” said club president Joan Spencer. “She moved to Ahoskie in 1962 and became a club member shortly thereafter.”

Spencer noted that Tucker has served as club president on two occasions (1971-75 and again from 1997-2001). She added that Tucker has assisted the club in other leadership roles – vice president and treasurer as well as repeatedly serving on committees.

“Anne has been very active in support of our local library,” Spencer said. “While we wish her well when she moves to Tarboro to begin another phase of her life’s journey, she will be greatly missed in Ahoskie by members of our club as well as by others.”

Fighting back the tears, Spencer announced the monetary gift the club was donating to the Ahoskie Library in Tucker’s honor.

In the meantime, Tucker failed to hold back the tears upon learning of what her fellow club members had done.

With the $2,500 in hand, Ahoskie Librarian Cindy Henderson said the money will be added to a growing Building Fund.

“We’re taking steps towards building a new library here in Ahoskie and it’s donations like this that will assist us in realizing that dream,” Henderson said.

“You know that our club is 100 percent behind this (new library,” Tucker said. “We go back to my first term as president back in 1971 when we helped lead an effort to have this current library built here on land donated by Hannah Brown.”

The current library opened in 1973 through a public-private partnership. Henderson said she heard the stories of organizations, such as the Thursday Book Club, going door-to-door to solicit funds to build the facility.

Tucker said she recalls lugging chairs upstairs at the old Ahoskie Police Department where they conducted fundraisers to build the library.

“We put on bridge tournaments at a dollar per person; we had 10 to 15 tables going at a time and we able to raise a lot of money,” Tucker remembered.

The Thursday Book Club was first founded in 1940. The club’s objectives are to bring closer relationship to the readers of Ahoskie, to aid the town’s library when needed and to provide club members with the opportunity to exchange books.

“We all bring a book to our meetings and pool them, then we draw from that pool every month, giving us a new book to read,” said club member Lois Smith.

Over the years the club has benefitted the Ahoskie Library in numerous ways, including the funds to add a children’s reading area to the facility. They donate one children’s book every month to that collection of reading material for young people. Additionally, the club has donated media carts and funds to install carpeting.

The club meets every fourth Thursday at Franco’s Restaurant.