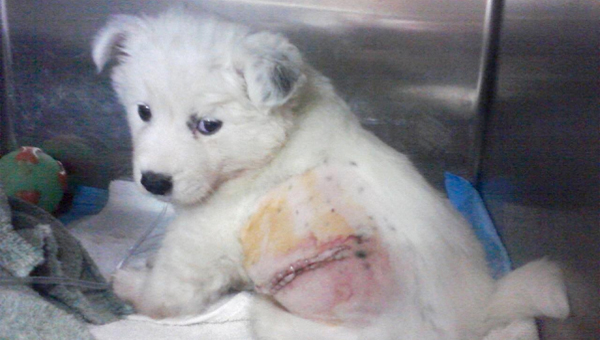 This six-week-old puppy shows the scars of an alleged intentional act of rage that occurred Christmas Day. Contributed Photo

POWELLSVILLE – Christmas is traditionally a time for happiness and good cheer.

Don’t tell that to an innocent puppy whose owner may face the penalties of a tougher state law that applies to animal cruelty.

“Christmas Crush” was the name given by employees of Powellsville Pet Clinic to a six-week-old fuzzy white puppy that was allegedly victimized by its owner. The animal’s two siblings were also involved in the alleged Christmas Day “hit and run.” One was not injured; the other was killed.

“It was touch and go with him for a while,” said a spokesperson at Powellsville Pet Clinic. “He made a

turn for the worse on Monday and we had to go into surgery with him. He was very critical after the surgery and we did not think that he was going to make it. His hernia went up into his chest and he was on the critical list for

a few days, but is now doing fairly well. He started barking at us on Wednesday. We were so excited and happy (upon hearing him bark).”

Allegedly, the owner, who resides in Murfreesboro, ran over the three puppies on Christmas Day. Reportedly, the owner looked out the window of her vehicle after the incident took place and drove off. A Good Samaritan witnessed the incident and personally transported the two surviving puppies to Powellsville Pet Clinic. Dr. Powell de-wormed the uninjured puppy and found a loving home to adopt the animal.

To date, the doctor’s bill for “Christmas Crush” is $600. He may need an additional medical procedure for his crushed leg. Those wishing to help offset those costs are encouraged to make a donation at Powellsville Pet Clinic, located on NC 42 East, or mail a check to PO Box 159 Powellsville, NC 27935. In the memo line, write “For Christmas Crush.” You can call the Clinic at 252-209-9077 for more information.

“This is a heartbreaking story,” said Susan Barrett, a volunteer with NC Shelter Rescue, a newly incorporated organization based in Clemmons (west of Winston-Salem). “Our group rallies together when there is an animal in need. We are asking for donations to be made to help this sweet little puppy that apparently was not wanted by its owner, who instead got mad and ran over the little dog.”

In the meantime, Barrett said she will make contact with law enforcement officials in the Murfreesboro area in an effort to bring charges against the dog’s owner.

“We fought hard for the General Assembly to implement Susie’s Law,” Barrett said. “Now we are making every attempt to make sure that law enforcement agencies across the state are aware of this new law and for these agencies to press charges at any time an innocent pet is maliciously killed or maimed.”

When contacted on Monday, Murfreesboro Police Chief Darrell Rowe, after checking the daily log, said no one reported the Christmas Day incident to his department. Rowe said he would contact Barrett for information.

Susie’s Law, which became effective in December, 2010, reads as follows:

The bill was introduced to state legislators after a Greensboro man received probation after burning, beating and leaving his 8-week-old puppy to die in August, 2009. The female pit-bull mix, who recovered at the Guilford County Animal Shelter, was later adopted and named Susie.