In the line of ‘fire’ 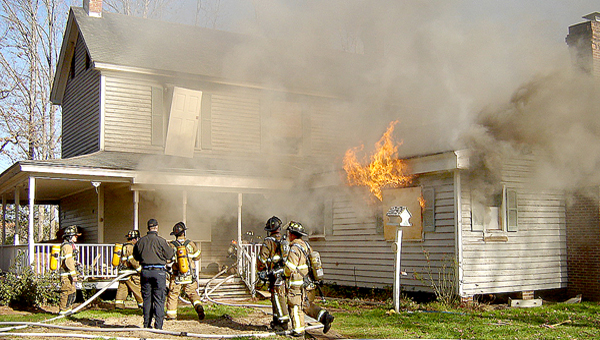 Firefighters from several local departments took part in a recent drill used to improve their skills as well as to introduce a new program designed to keep abreast of a fireman’s medical condition while on the scene. Contributed Photo

WINTON – It’s not every day that a firefighter purposely strikes a match to torch a home.

Then again, it’s not every day that those brave volunteers that protect our lives and property get the chance to hone those skills during an authentic training drill.

Such was the case here recently where the Roanoke-Chowan Community College Emergency Services Training Department, in partnership with the Winton Fire Department and Hertford County EMS, had a full day of training on live fire burning and firefighter re-hab.

“Live burn training is invaluable in the development of our fire personnel and the emergency preparedness for the local fire and EMS departments,” stated Fred Curley who serves as Director of Fire, EMS and Law Enforcement Training at RCCC.

Curley watched as the firefighters were placed through 10 hours of intensive training.  The structure used for this training was a two-story home that was donated to the Winton Fire Department.

There was a lot of interior fire fighting (one room at a time). Meanwhile, members of the Ahoskie Rural Fire Department used the training to “shake down” their new ladder truck to supply water from an elevation above the fire scene.

All the firefighters were shown how to extinguish a blaze with the minimum amount of water in an effort to prevent damage to other interior parts of a home.

Another vital element to the training was the Firefighter Re-Hab program. Curley said that is designed to ensure that the physical and mental well being of emergency response personnel operating at the scene of a fire, accident (or a training exercise) don’t deteriorate to the point where it affects their safety or that of other responders.

“Firefighting is dangerous in the best of circumstances and any additional physical or mental stress increases the danger,” Curley noted.

The primary mission for the Firefighter Re-Hab Team is to identify, examine, and evaluate the physical and mental status of firefighter personnel who have been working during the emergency incident or a training exercise.  Following a proper survey it should be determined what additional treatment, if any, may be required.

The National Fire Protection Association (NFOA) Standard 1584, the Standard on the Rehabilitation Process for Members During Emergency Operations and Training Exercises, is the result of years of work by NFPA.  It’s designed to complement the other standards it has published relating to safety, fitness and health.  The document also reflects the efforts of many fire-service leaders in understanding the physical stress of fire and rescue work, and the leadership of the U.S. Fire Administration (USFA), which recognized the benefit of on-scene recovery of fire personnel.

“Because firefighting is physically demanding work in challenging environments, firefighters may become rapidly overheated, fluid depleted, and energy depleted,” Curley said. “As a firefighter’s physical condition becomes compromised, he or she is less able to perform in a team critical situation, and more likely to be injured.  Therefore it becomes important to establish rehab as a formal function on working fires and multiple alarms. This standard establishes procedures for the management of firefighter rehab.”

Curley said that the IC (Incident Command) should establish a Medical/Rehab Unit at any working fire or multiple alarm fire, as needed.  An ambulance or QRV Unit should be ordered if one has not been automatically dispatched.  The officer or lead attendant will become the Medical/Rehab Unit Leader. That leader needs to first select a location to establish rehab based on the following criteria:

Placement of transport unit for ease of movement in and out of the scene;

Safety outside of hazard zone, away from smoke and vehicle exhaust;

Accessible to transport ambulance if required; and

Close enough to the fire scene to facilitate movement of firefighters between rehab and tactical assignments.

Curley said firefighters visit the rehab team after they have used up two SCBA bottles (air packs), have been engaged in strenuous activity for 45 or more minutes, have been exposed to a harsh environment for 45 minutes or more or if an officer advises that personnel are “exhausted.”

Each firefighter will be evaluated by the Medical/Rehab unit personnel who will record the following information: time of evaluation, resting pulse rate, SpO2, blood pressure, respirations, and Co2 (if available).

Each firefighter must receive 10 minutes of rest away from the incident scene, and drink a minimum of eight ounces of fluids (water, Gatorade or broth in cold weather) if available.

After their 10 minutes of rest, each firefighter will be reevaluated, looking for any of these red flags – pulse rate of 110 or greater, body temp of 100.6 or greater and a SPO2 of less than 92 percent.

Any firefighter with a red flag finding will be rested an additional 10 minutes and then reevaluated. Following that additional rest period, any firefighter who continues to meet red flag criteria will be taken off the line and treated as an emergency patient by Medical/Rehab.

“We value the efforts of our local firefighters as they perform their tasks,” Curley said. “We completely understand their rush of adrenalin once they reach the scene of a fire. They’re ready to extinguish that fire, no matter how long that effort takes. But the longer they’re on the scene and the longer they’re exerting energy, their health becomes compromised.

“This re-hab program keeps track of their vital signs, allowing the opportunity to pull them off duty if their vitals reach what is considered unsafe levels. We want them to do their job and protect property and innocent lives, but we also want them to remain safe and healthy as well,” Curley concluded.