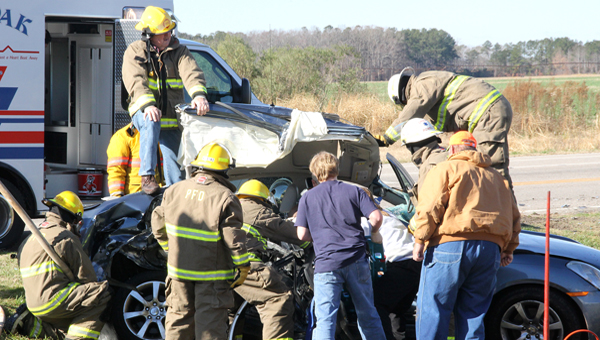 Volunteers with the Powellsville Fire Department work to free one of the victims involved in a 12 noon crash on Wednesday. Staff Photo by Cal Bryant

Arthur Ashe, 64, ofRaleighwas killed when the car in which he was a passenger was involved in the 11:42 a.m. accident at the intersection of US 13 and NC 42.

North Carolina Highway Patrol Trooper K.R. Velazquez-Genao reported that 60-year-old Julius Ashe of Roselle, NJ, the brother of the victim, was traveling south on US 13. He attempted to turn his 2006 Infiniti passenger car left off of US 13 onto NC 42, but pulled into the path of a 2008 Chevrolet Tahoe, operated by Daphne Mizelle, 36, of Ahoskie. The Tahoe struck the Infiniti in the passenger’s side door.

The Infiniti spun around on impact and came to rest in the median area between the two roads. The impact caused the Tahoe to overturn in the roadway. It came to rest upright in the same median.

Julius Ashe was transported from the scene toRoanoke-ChowanHospitaland was then airlifted toPittCountyMemorialHospitalinGreenvillewhere Velazquez-Genao said he was in stable condition.

Mizelle and her passenger, 18-year old William Mizelle Jr. of Ahoskie, suffered minor injuries and were taken to R-CH.

Charges are pending in the accident.

The fatality was the 11th of the year in the Highway Patrol’s Troop A District II area (Bertie, Hertford and Gates counties). It was the fifth fatality inBertieCounty this year.

KILL DEVIL HILLS – Mark Evans was first bitten by the public service bug at the young age of 14.... read more