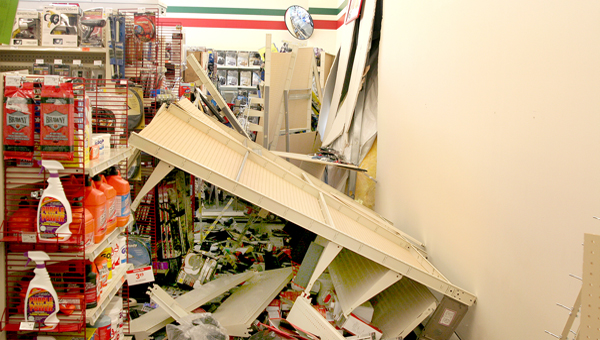 The employees and customers at O’Reilly Auto Parts in Ahoskie received a shock on Monday as a vehicle came crashing through the side of the building. No one was injured, but the store did suffer damage to the outside façade. Numerous items and shelves were also displaced inside, as shown in this photo. Staff Photo by Amanda VanDerBroek

AHOSKIE – Total damages are unknown after a pick up truck plowed into the side of O’Reilly Auto Parts here early Monday afternoon.

Lt. W.A. Benton of the Ahoskie Police Department reported that no one was injured in the 12:51 p.m. accident. However, damage inside the store, located at 1411 East Memorial Drive, was extensive.

Benton said the accident occurred when 18-year-old Daniel Merritt of Harrellsville was attempting to park his 2008 GMC truck in a parking space on the west side of the building.

“As he was attempting to stop and park, the driver’s foot slipped off the brake and onto the accelerator, causing the truck to lurch forward and into the side of the building,” Benton said.

“Every item on every shelf along that wall where the impact occurred was knocked over,” Benton said. “I’m waiting on a report from O’Reilly’s as to the extent of the damages.”

No charges were filed.