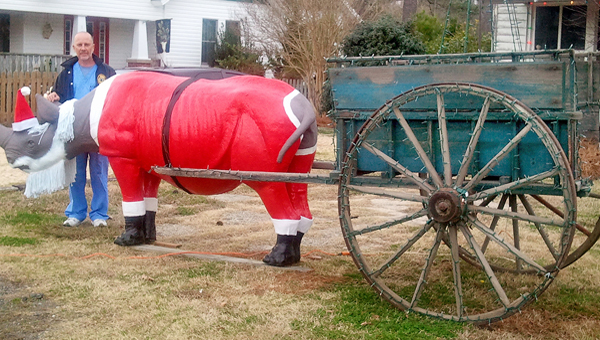 Peter Woglom poses with “Spike” in the front yard of his home in the Trap community of Bertie County. Staff Photo by Cecilia Jones

After years of weathering hurricanes, changing seasons, and general wear, there was some question as to whether Spike was a safety concern for those walking or driving through downtown Colerain.

When Jim Edwards, owner of Western Taxidermy, noticed that Spike might be ready to retire from his duties, the rhino was extracted from the platform on which he rested.  He was moved to the back of the taxidermist shop that specializes in African Taxidermy and Reproduction Taxidermy. It was from there that Peter Woglom, PA-C, noticed Spike from his office at Colerain Primary Care.

Woglom can remember Spike atop the storefront when he and his family moved to the area in 1993.  Once the rhino’s duties as chaperone of Colerain had ceased, Woglom offered to purchase Spike from Edwards, in hopes to prevent losing the town’s mascot.  In the late spring of this year, the purchase was complete and Spike went to live with his new owners, the Wogloms of Trap, a small Bertie County community located along NC 42.

Just as he graced the storefront he decorated for so many years, Spike continues to bring pleasure to those who happen to be driving through rural Bertie County.

The Wogloms give Spike the run of their front yard and he has taken full advantage of the open spaces.  Periodically, the 150-pound fiberglass rhino will move locations within the yard, perhaps to give onlookers his different, or maybe most flattering angles.

Neighbors grew concerned when Spike disappeared from his position for a few weeks prior to Christmas.  As it turns out, his hiatus can be attributed to his preparations for the holiday season.

Most recently, Spike dons a bright red Santa Claus suit, made of paint, bath towels, and a mop head.  He pulls a wooden cart complete with a Christmas tree in tow.

There is no doubt that this once-retired rhino has found a part-time job at the Wogloms in Trap.   What perhaps could have been lost or made irrelevant after its original use had expired has now been given a new chance and a new purpose.

Spike has undoubtedly brought joy to the Wogloms and surrounding neighbors, and also to strangers that happen to be passing through. Perhaps we can expect to see an Easter Bunny Spike or Independence Day Spike in the holiday seasons to come. For the time being, keep an eye out for Santa Spike as you pass through Trap.