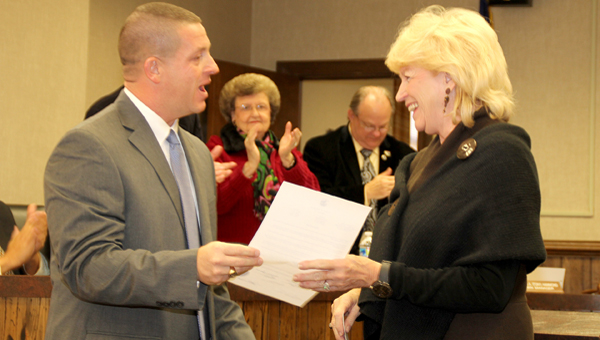 To a standing ovation, outgoing Ahoskie Mayor Linda Blackburn receives a resolution of appreciation for her years of service to the town from her successor, Brien Lassiter. Staff Photo by Cal Bryant

AHOSKIE – Eight years ago, Linda Blackburn was considered a novelty in becoming the first female in Ahoskie history to hold the office of mayor.

Now, 96 months later, Blackburn leaves that office after seeing the town expand it borders, increase its population and significantly upgrade its municipal buildings, services and infrastructure.

That service to the town did not go unnoticed in her final actions as mayor on Dec. 13.

Ahoskie’s new mayor, Brien Lassiter, read a resolution of appreciation on behalf of the town to the former mayor, one that recognized her dedicated and distinguished service. The resolution praised Blackburn for performing her duties in an ethical manner and for placing the needs of the community above her personal welfare.

As noted by Lassiter, from 2003-11 Blackburn was instrumental in helping to guide the town in the building of a new police station, new wastewater treatment plant, and the Ahoskie Creek Recreation Complex, to include the Ahoskie Amphitheater; implementation of the Community Development Block Grant program; purchase of a new fire truck; annexation; Movie in the Park, the town’s annual Easter Egg Hunt; Ahoskie Heritage Day; and the annual Christmas Tree Lighting program.

Ahoskie Town Manager Tony Hammond also presented Blackburn with a certificate of appreciation for her “untiring devotion to her prime civic duty performed unselfishly and in a distinguished manner.”

“This wasn’t the outcome I wanted (in her reelection bid), but it was the outcome that was supposed to be,” Blackburn said in making remarks following the two presentations. “I have said all along that when one door closes, another will open. I don’t what that is for me, but I have the faith to step through that door when it does open.”

Turning to address the new mayor, Blackburn stated, “Brien, I want to wish you the very best. You will find the people sitting with you at the council table are a wonderful group to work with, they put forth a team effort. Likewise you will find a wonderful group of town department heads and employees. They all will make you look good, just as they did in my case.”

Passing along a statement made by former Ahoskie Councilman and current Hertford County Commissioner Ronald Gatling, Blackburn left Lassiter with some advice she was given early in her role as mayor.

“Just as Ronald told me years ago, I encourage you to simply be the best mayor you can be,” Blackburn stated. “I tried every day to do exactly that.”

She concluded by saying, “There have been some trying moments, but this has been the best eight years of my professional life. They were fun because I had the opportunity to work with so many great people. Thank you all so very much for giving me that opportunity.”

Hey Hawks fans! Fall semester has ended at Chowan, but there is still a lot going on in the athletic... read more