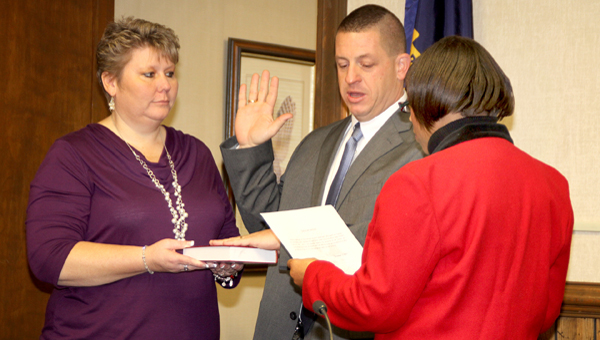 With his wife, Renee, holding the Bible, Brien Lassiter takes the oath of office as Mayor of the Town of Ahoskie during a Tuesday morning ceremony at the Town Hall. Shown administrating the oath is Joleatha Chestnutt, Ahoskie Town Clerk. Staff Photo by Cal Bryant

AHOSKIE – As a former police officer, Brien Lassiter completely understands the nuances of dealing with the public. Perhaps that will serve him well in his role of Ahoskie’s Mayor.

Lassiter, a 42-year-old native son, took the oath of office on Tuesday morning, becoming the town’s first Mayor to accept a four-year term due to a recent change in Ahoskie’s Town Charter.

“Like anything new, a person gets a bit nervous at first, but once I settled into the (Mayor’s) chair I began to feel more comfortable,” Lassiter said after conducting his first Town Council meeting.

For Lassiter, getting to this point as a rookie politician came due his desire to serve the public in a much different role than he was accustomed to during his years as a police officer in town.

“I’ve always had the desire to be involved in politics, I just never knew until now what that role would be,” Lassiter noted. “Perhaps that desire stemmed from my now late grandfather (Merle Vaughan) who once served as an Ahoskie Town Councilman.

“I felt like instead of being a part of the flow, why not help guide the flow,” Lassiter continued. “I’m a people person, I like working with others. I feel that’s the role of a mayor, serving as the liaison between the citizens of this town and the town council. I feel it’s the mayor’s job to be the eyes and the ears of the town…..to be a messenger for the citizens.”

Lassiter, the son of Steve Lassiter and the late Nelda Lassiter, is a homegrown product. He graduated in 1987 from Ahoskie High School where he competed athletically in football and baseball. He owns BS degrees in Political Science from East Carolina University (1996) and Criminal Justice from Chowan University (2004).

In and around his college pursuits, Lassiter was a law enforcement officer – initially launching that career in 1991 at the Ahoskie Police Department. He left Ahoskie in 1996 to work for the Kill Devil Hills Police Department, returning home in 2000 where he again worked for the APD for a brief time before becoming the Director of Safety and Security and Chief of Campus Police at Chowan University, a position he held until 2005.

Lassiter rejoined the Ahoskie Police in 2005 as a Patrol Sergeant and eventually rose to the rank of Lieutenant while also serving as the department’s Training Coordinator.

Since early 2009, Lassiter has served as the Investigator for the office of District Attorney Valerie Asbell.

Lassiter and his wife, Renee, are the parents of three sons, Evan (11) and 10-year-old twins, Alden and Zack.

The new mayor said he felt the number one item on his list of duties was to ensure that citizens are properly served.

“Our town employees and department heads need to do the very best job they can to provide the necessary levels of services for all our citizens – from children all the way to our senior citizens,” Lassiter said. “We do not need to cater to one specific group. We need to provide the same services and opportunities to everyone that calls Ahoskie as home.”

Lassiter added that his new position as a municipal leader will be easier due to the fact that he already knows, or has worked alongside, so many of the town’s employees.

“There’s already a natural friendship, relationship, there,” he stated.

As far as his top priorities as mayor, Lassiter listed the need for a new fire department and new town library. He also wants to see the old Downtown Merchants Association reformed in an effort to breathe new life into the Main Street shopping district.

“Another thing I want to see us do as a board is to address the water and sewer rates that our citizens now pay,” Lassiter stressed. “I don’t know what can be done to lower those rates, but we need to look at them from each and every angle to see what can be done.”

Street repairs are also high on Lassiter’s list. He said the town needs to work closely with North Carolina DOT to see what can be done to improve the state-maintained streets in Ahoskie.

“We also need to keep a close eye on what types of grants we can apply for,” he added. “You must always search for grant money that will help us afford to give the most service to our citizens at the least amount of cost to them.”

Lassiter said he feels by working with a town council that he has known all his life, Ahoskie can move forward.

“That’s not saying we haven’t moved forward under the leadership of our former mayor. Linda (Blackburn) did a good job and I thank her for her service to the citizens of Ahoskie,” Lassiter concluded.

AHOSKIE – A Colerain man was jailed earlier this week after a routine traffic stop resulted in a drug arrest.... read more