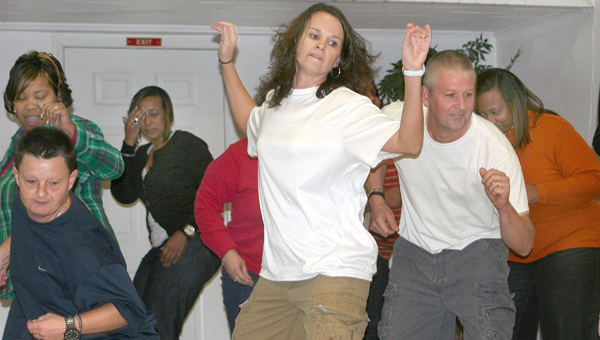 The gathered throng also said their official goodbyes to Bertie County Manager Zee Lamb, who is leaving his post after 11 years on Dec. 31. That farewell drew tears as well as congratulatory applause.

He talked about the successes in the county and credited those to a working effort between the county commissioners, county manager and county employees.

Following lunch, Hoggard returned to the podium and thanked all the county’s employees for their hard work and dedication and wished them a safe and happy Christmas and New Year.

Then, the entertainment took center stage with three Bertie County Commissioners and their partners competing with two members of the Bertie County Sheriff’s Department for the best dance competition.

The afternoon began with Hoggard and his partner, Evelyn White. They were followed by Norman and Jean Cherry and then Sheriff’s Office employees Carl Hoggard and Bonnie Brantley.

The duo then did their dance to rousing applause from the county’s employees.

Upon vote – by applause – Harrell and Mizelle were declared the winners of the event.

The next order of business was to recognize the employees reaching milestones in their career with the county.

Recognized for 35 years of service was Bertie County Register of Deeds Belinda White. Others recognized included:

The final event of the day was a special presentation in which county employees said goodbye to Lamb via a video message. Each department took time to thank him for his service and wish him well.

At the conclusion, Lamb expressed his gratitude for the county employees.

“First of all, this is a bitter-sweet occasion for me,” Lamb said. “The last 11 years I’ve had the best job of my life. I’ve had a few, but this is the best job I’ve had.

“I want to thank the county employees,” he said. “Bertie has a lot to be proud of. I urge you to keep it positive even when people try not to be positive to you.”

He said the county staff was about the business of working for the people of Bertie County.

“Government is supposed to be about working for the good of the people,” he said. “That is what you’re about and what I’ve tried to be about for the last 11 years.”

Hoggard added the thanks of the Bertie County Commissioners for Lamb’s service and also said the county’s employees were appreciated.

“The bottom line is that it is not about you or me, but the people we serve,” Hoggard told the county employees. “Thank you for your service to our county.”