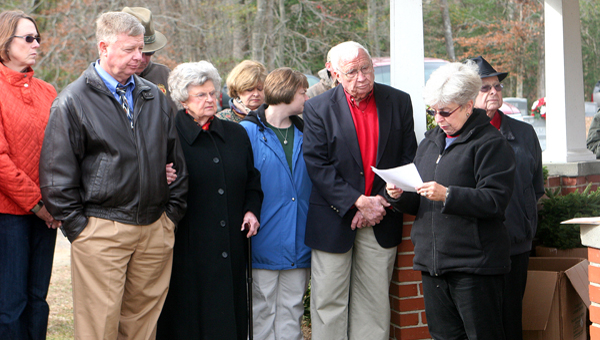 That is the mission of Wreaths Across America and it came to Edgewood Cemetery in Windsor Saturday afternoon. In one of hundreds of ceremonies across the country, locals took time to remember veterans and lay wreaths on the graves of those who have died.

Len Joyner and her family were the leaders of Saturday’s celebration and were responsible for the short program held as veterans from all branches of service were honored.

Wreathes Across America is a nonprofit organization founded to continue and expand the annual wreath laying ceremony at Arlington National Cemetery begun by Maine businessman Morrill Worcester in 1992.

Joyner said her family wanted the ceremony to come to Windsor because they had been deeply touched in their own lives.

The ceremony began with VFW Post 6060 of Elizabeth City presenting the colors on the flag pole at the cemetery and then the gathered crowd repeated the Pledge of Allegiance to the Stars and Stripes.

Joyner then asked for a moment of silence to remember fallen soldiers, prisoners of war and those who are missing in action. The observance was also in honor of those who have and continue to serve in the armed forces.

Joyner said the ceremony of remembrance was taking place not just in Windsor, but in places all over America. She said it was a simple reminder of the price that had been paid for freedom.

“The freedoms we enjoy today have not come without a price,” she said.

She said there were many who had given their lives for people to enjoy the freedom they have in this country.

Then, quoting the late President Ronald W. Reagan, she said, “Freedom is never more than one generation away from extinction. We didn’t pass it to our children in the bloodstream. It must be fought for, protected, and handed on for them to do the same, or one day we will spend our sunset years telling our children and our children’s children what it was once like in the United States where men were free.”

Following the ceremony, the group dispersed throughout the cemetery to lay wreaths on the graves of former soldiers. Joyner said she hopes next year will be a larger event with more people involved.