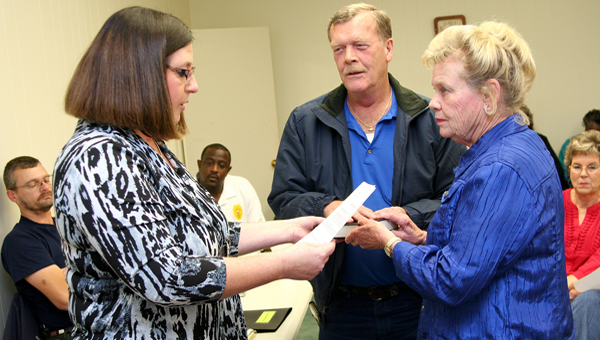 WOODLAND — Three new faces were welcomed to the Woodland Board of Town Commissioners last week.

Garris served on the board as a town commissioner for three terms from 1999 to 2005. He did not re-file after the 36 year veteran of the National Guard learned he would be deployed overseas.

He worked at the Woodland Armory for 19 years and later was transferred to the headquarters in Ahoskie.

“Too many people noticed that I didn’t have anything to do,” he said sitting in the Mayor’s Office.

A small group of people began a write-in campaign for Garris after getting his permission, which he was hesitant at first to give.

“I didn’t want to put on too many hats so I could enjoy my retirement,” he said. “(I said) I’m not too interested in being mayor, but, this is where I messed up, I said if I got the majority vote, I would have to reconsider wouldn’t I? And that opened the door.”

Garris said his first goal as mayor is to keep the town on track.

“First of all to stay viable and maintain basic needs of the town, water and sewer, police protection, fire protection,” he said.

Garris said the primary focus for him, and the board, is to be good stewards of the town as well as learning about the topics affecting the town.

Barnes previously served on the board as well in the late 1980s and ran as a write-in because of the lack of candidates.

“No one was willing to do it,” she said.

Despite her previous experience on the board, Barnes said she have to learn the issues at hand.

“I’m sure I’ll learn over time,” she said. “My goal always is to make things better for the citizens of Woodland and served them in any capacity.”

At the same meeting, former Mayor Jay Jenkins and former Town Commissioner Joseph Mitchell were presented plaques of appreciation for their service to the town.

WOODLAND — The town of Woodland will be seeking legal advice from the state level regarding ownership of the former... read more