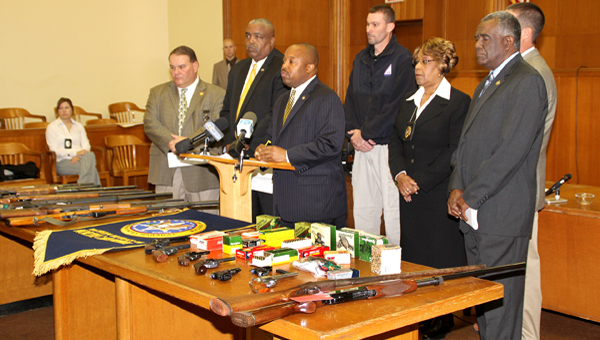 WINTON – Local, state and federal law enforcement officers discovered more than they bargained for on Monday.

During the course of the day, authorities visited the homes of 134 registered sex offenders in the participating counties. In addition to verifying the compliance of those sex offenders and making arrests, officers also seized 18 firearms, 677 rounds of ammunition and 13 dosage units of crack cocaine.

George Lee Deloatch, 50, of Troy Street, Ahoskie, possession of a firearm by felon;

Three others were arrested, to include:

Darryl Keith Deloatch, 50, for larceny of a motor vehicle; and

“We want to send a loud and clear message to the citizens….we will use every resource available resource to protect you, to protect your children. We will arrest anyone that threatens the safety of the citizens,” said United States Marshal Scott J. Parker whose office covers 44 counties in the Eastern District of North Carolina.

“We all came together as one,” Parker added. “We, these different law enforcement agencies, went out and put our lives on the line. We went out with bullet proof vests on and knocked on doors, not knowing what to expect. Look at these guns we confiscated on Monday. That’s proof of the danger we face. These men and women are to be commended. They did their job and did it well.”

This operation is the first of its kind in this area of the state, and follows the successful conclusion of other such operations sponsored by the U.S. Marshals in the Eastern District of North Carolina.  On July 27, 2006, the U.S. Congress passed the Adam Walsh Child Protection and Safety Act.  This legislation is aimed at sex offenders who fail to comply with state law by moving from state to state and fail to notify the required authorities of their current location.  Prior to this federal law, such sex offenders could easily move to new communities undetected, where they were less likely to be recognized and therefore more readily able to re-offend on unsuspecting victims and their families.

“It was a good day in northeastern North Carolina,” said Gates County Sheriff Ed Webb. “We were able to take numerous firearms from offenders who aren’t supposed to have weapons in their possession. We also discovered cocaine, marijuana and a wanted fugitive. Myself and my team were very proud to be a part of such a successful and well run operation. The citizens I’ve heard from were very impressed with the operation.”

“This operation was such a success that we look forward to doing this again,” Northampton Sheriff Wardie Vincent stated. “Not only did this operation impact the citizens of our county, but the sex offenders as well. My phone rang off the hook Monday night after they learned what was going on. They wanted to let me know they were in compliance and in place.”

“This joint effort went very well,” Hertford County Sheriff Juan Vaughan noted. “Not only were we able to ensure that most all of our registered sex offenders were in compliance in our county, we also used the occasion to solve a crime involving a stolen weapon. I want to thank everyone involved in this great operation.”

“The deputies gathered here in Winton were all sworn in as deputy U.S. Marshals,” Parker said. “That’s because our operation does not stop at the county line, giving them the same jurisdiction as a U.S. Marshal.  If a sex offender was not at home, we went where they were to check them, even if that meant contacting them at their places of employment.”

Each team dispatched for the compliance checks consisted of a U.S. Marshal, a deputy sheriff and a member of NC Community Corrections.

The operation did not stop with just sex offenders. It also served the purpose of putting the new VIPER radio system to work, one that allows law enforcement agencies to “cross over” their normal frequencies and use one channel to coordinate the operation in a precise and workmanlike manner.

“We were able to talk back and forth between the three counties thanks to the help of Emergency Management departments in Gates and Hertford counties,” Parker said. “This worked extremely well and served another purpose as it allowed us to train using the VIPER system down the road in the event of a natural disaster. We need to be prepared. We went outside our normal element and found out that this system does work and work well.”

Parker said the Monday’s operation is far from over. Follow-ups of registered sex offenders not contacted on Monday are ongoing. He stressed that additional local, state and federal charges are pending.

The U.S. Marshals Service has been tasked as the lead investigative agency to enforce the Adam Walsh Act.  As a result, Sex Offender Investigations Coordinators are stationed in every judicial district throughout the United States and its Territories. Parker said they assist local and state jurisdictions in assuring that sex-offenders comply with it the requirements of the act, in addition to prosecuting those who violate it.

WINTON – It’s down to two. On Monday, the Hertford County Board of Commissioners narrowed their list from three to... read more