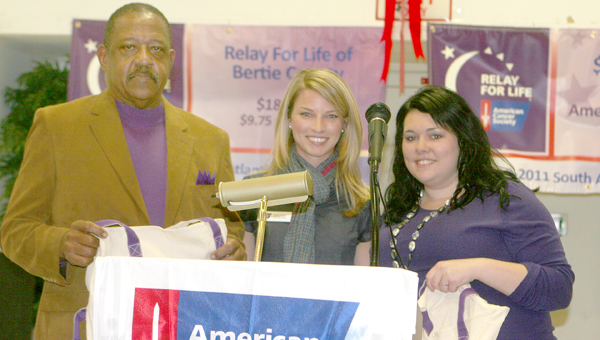 Thursday night, the Bertie County Chapter of the American Cancer Society was recognized as tops in the nation per capita for their fundraising efforts last year. The chapter raised more than $188,000 last year which was an average of $9.74 per capita and put them number one in their population category in the United States.

“Because of your efforts, Relay for Life in Bertie County is part of the Top Notch Club which is very exclusive,” ACS representative Gabby Lassiter said. “The Top Notch Club is for the top 15 fundraisers and the top 14 per capita events.”

Those were just the beginnings of the awards handed out after a successful 2011 campaign. Co-chairs Codie Bartley and Anita Hoggard presented awards for last year’s event.

The Care Giver Awards were given to the family of Betsy Byrum and Tommy Dawson, a brother and sister who each lost their battle to cancer. Shannon Hoggard was also given the award for taking care of her mother during her bout with cancer.

The Sword of Hope Award was presented in memory of Dr. Al Thompson, the Executive Director of Bertie Rural Health, who lost his battle with cancer earlier this year.

The following teams were also recognized:

Following the celebration of 2011, Bertie County Relay for Life immediately began their kickoff celebration for the 2012 event. The first order of business was naming the new co-chairs. They are Glenwood F. Mitchell and Bartley.

“We want to liven things up,” Mitchell said. “I had the golden opportunity to attend the American Cancer Society summit in Greensboro and there were a large number there who had survived cancer and they were some of the happiest people I ever met.

“I decided when I got back to Bertie County, we had to be excited,” he said. “We want to change things up a big. There ought to be joy among those who have survived cancer and especially among those who don’t have it. We should celebrate.”

He asked everyone who had cancer or was a caregiver that celebrated a birthday since May to stand up and the rest of the room sang “Happy Birthday” to them.

“I want to make this more personal,” he said. “We are all planning Christmas parties. I want us to think about what those parties would be like with more people.

Mitchell said the goal of 2012 would be to get more people involved because the event should grow. He said too many families in Bertie County were affected by the dreaded disease and more would join the fight if asked.

Bartley also stressed the need to have more survivors be part of the celebration and urged team captains to do more to have survivors register next year.

The event will be a giant birthday party, according to the chairs of the event. They are asking each team to decorate their site for a party.

Perdue is on track to raise $112,000 for the coming year’s event, according to organizers.

“Think what we can do if the rest of us will just match Perdue,” Mitchell said. “We can do so much if we can do that.”

In closing, Mitchell asked that each person remember their reasons for relaying. He gave a list of his own reasons and said each person should remember working to help the American Cancer Society is a personal decision.

First meetings for next year’s events will start in January.

WINDSOR – Plans are moving forward to have a law enforcement memorial near the Bertie County Courthouse. The idea has... read more