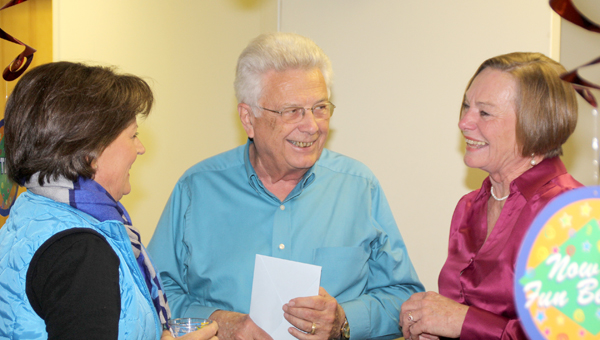 WINTON – Pardon the pun, but for W.S. “Bill” Earley, there was no such thing as early retirement.

After 54 years of service to the farmers of Hertford County, Earley retired effective Dec. 2 as the CED (Manager) of the county’s FSA (Farm Service Agency) office. And if weren’t for the “age thing”, Earley may have considered staying on just a bit longer.

Earley’s longevity has led him to outlast many of the county’s farmers he initially worked with back when he first launched his professional career.

“I can count, on two hands, the number of farmers still working today that I worked with when I first started here,” he noted. “Perhaps that fact goes hand in hand with an overall reduction of the number of farmers in Hertford County today. Now it’s pretty much a big business with five or six really big farm operations in the county.”

He has also seen the art of farming change dramatically during the course of his 54 years on the job.

“It’s a lot more high tech now,” Earley said. “Farmers today have devices on their tractors that can accurately measure the exact amount of chemicals they need to apply. Some of the computer driven devices they use now you have to have a college degree just to know how to operate them.”

Earley was the center of attention on Nov. 29 when a large crowd gathered in the meeting room of the Hertford County Cooperative Extension office in Winton. There, FSA officials from Hertford and other neighboring counties joined with local farmers, family, friends and other acquaintances to pay tribute to a man that has dedicated his life towards the betterment of agriculture.

“That was nice, perhaps a lot more than I deserved,” Earley said. “I appreciate what they did for me on Tuesday. It’s those friends, those business colleagues that I’ve spent my entire career around who I’ll miss the most.”

All of those entities were under the direction of the United States Department of Agriculture.

Earley started as a Program Technician. In 1962 he was selected for the County Office Training Program, a six-week course at the state USDA office in Raleigh. In April of that year Earley became the CED, or manager of the FSA office for Hertford County, a position he held for 50 years.

“Back when I was a Program Technician, I only had responsibility for just one of the programs in the office and back then there six or seven of us in the office,” Earley said. “When I made the transition to CED, I was responsible for all of it.”

Earley spent his entire career in Hertford County. He did, for a three-year period, serve double-duty as the acting CED for the Gates County FSA office.

Prior to entering the USDA ranks, Earley had no formal training. However, he did have years of experience in agriculture by growing up on the family farm in the Swain’s Mill (Harrellsville) area of Hertford County.

“I graduated from high school in 1956; other than that all I needed to know to land my first job as a Program Technician came from my experience on a farm,” he said.

Over the years, Earley said he has witnessed numerous changes in the program services offered to local farmers.

“What didn’t change at all was our passion to help our farmers,” Earley said. “That’s what all of us in FSA stand for – our farmers, our producers. Our programs are geared to offer assistance. (US) Congress decides what type of programs you’re going to have and then USDA writes the regulations to fit what Congress says we can have. It’s left to those of us working these county offices to administer the regulations.”

At one time FSA programs were broken down by commodities (Production Adjustment Programs), which were related to crop production and allotments for major crops such as tobacco, cotton, peanuts, corn and soybeans. There was also a conservation program, which worked with farmers on planting cover crops as well as working with farmers on water drainage issues.

“Hertford County was ranked among the largest agricultural counties served by the FSA at one time,” Earley recalled. “We’d have a Program Technician handling just peanuts, one for tobacco, another for cotton, etc. USDA just kept culling down the number of staff members. We do still have a lot of responsibility when it comes to transmitting the information FSA needs to make program payments to our farmers.”

FSA offices throughout the nation also oversee programs that help farmers in times of natural disasters. Earley and his office are not immune from administering those programs, particularly in recent months on the heels of a tornado in April and Hurricane Irene in late August. His office helps to assess those damages.

Not only is Earley retiring, but so is veteran Hertford County FSA Program Technician and administrative aide Beth Baggett. Her last day was Nov. 29 after 32 years of service.

As far as his future plans, Earley said he is entering retirement “one day at the time.”

“I not going to say that I wouldn’t be interested in something on a part-time basis,” he said. “I’m 72 years old and I worked 54 years, I don’t think I’ll have many more years to worry about.”

After more than a half decade of service, Earley said he leaves the job with no regrets. He has worked at an office that was judged as the best in the entire state for service.

“Maybe if I had the chance to do this all over again I might have retired a little bit earlier,” he said. “If I had retired when I first became of age, at 55 years old, I would have had to find another job. So the good part about sticking around this long is that I was able to work all at one place over a long stretch. And I’ve enjoyed every minute of it….the job and the people I’ve had the opportunity to work with and work for. Every day was a good day because of what we did for a living, that of giving good service to our farmers.”