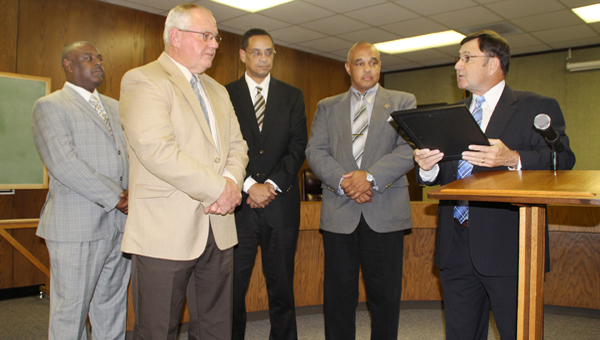 WINTON – Construct a sentence with the words honor, dedication or courage and nine times out of ten the name Ronnie Stallings is included.

Stallings has retired from the Hertford County Sheriff’s Office after 30 years of loyal and faithful service. The latter part of his law enforcement career witnessed Stallings serving as Chief Deputy under the direction of Sheriff Juan Vaughan.

Last week the Hertford County Board of Commissioners honored Stallings by presenting him with a resolution of appreciation for his many years of public service to the citizens.

“We certainly appreciate all his years of service to our county and his hard work during that span,” said Hertford County Manager Loria Williams.

“I was in law enforcement for 26 years; Ronnie Stallings has forgotten more about law enforcement than I came to know during my time,” said Commission Vice Chairman Curtis Freeman, a former member of the Ahoskie Police Department who now serves as head of security for Hertford County Public Schools.

“He is very deserving of his retirement, but we are losing a very valuable part of our local law enforcement team,” Freeman continued. “I personally appreciate what Ronnie has done for me in my career. He was always one that I looked up to.”

“Being in Probation and Parole for 23 years I got a chance to work alongside Ronnie,” said Mitchell. “What an example he set for guys like me to come along in the field. He leaves some big shoes to fill.”

Commissioner Ronald Gatling told a story that accurately summed up the dedication that Stallings had for his job.

“Several years ago on a hot summer day where it had to be over 100 degrees, I received a phone call from my wife that her car was broke down and she and my two-year-old child were stranded,” Gatling recalled. “I called the Sheriff’s Office to see if they could send someone to help and the person sent to assist was Ronnie Stallings.

“It’s not easy to find the spare tire on my wife’s car, but Mr. Stallings found it, put it on and sent her on her way,” Gatling continued. “I thank you for that and I thank you for your many years of service to all citizens of Hertford County.”

“From the bottom of our hearts we really appreciate all you did for our citizens for those 30 years,” said Commission Chairman Johnnie Ray Farmer. “You always have been for as long as I’ve known you a kind of guy that can be counted on. You were always just a phone call away. Hertford County is much better off because of your service.”

“Ronnie will truly be missed,” Sheriff Vaughan said. “He served with distinction and honor and made my department stand tall in the law enforcement community. He was a great Chief Deputy, one of the best lawmen I’ve ever had the pleasure to work with.”