APD to the rescue 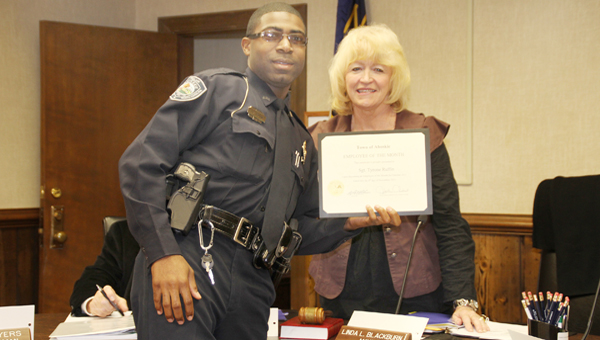 AHOSKIE – Under normal circumstances, the driver of a vehicle traveling 20 mph over the speed limit in a school zone is in a whole heap of trouble.

Oct. 27 was not a day where normal circumstances applied.

Sgt. Tyrone Ruffin of the Ahoskie Police Department is being praised for helping to save a man’s life after he performed a traffic stop on a vehicle that was clocked at 44 mph in a 25 mph school zone.

As it turned out, the passenger in that vehicle was in need of immediate medical attention and the driver, his daughter, was attempting to quickly transport her ill father to Roanoke-Chowan Hospital.

“Sgt. Ruffin demonstrate the highest level of professionalism in this case,” said Ahoskie Police Chief Troy Fitzhugh. “He exhibited discernment and unknowingly helped to save a human life.”

Fitzhugh said that Ruffin was working the school zone on West First Street on that particular morning. It was there that he observed a vehicle traveling east at a high rate of speed.

“Sgt. Ruffin did his job by activating the blue light and siren on his patrol car and stopped the speeding vehicle near the old rescue squad building,” Fitzhugh said. “We position officers every school day in and around Ahoskie Elementary School, the high school and Bearfield Primary School to protect those young children as they make their way to school and we’re very strict on drivers that do not obey the posted speed limit in those school zones.”

On this particular morning, Ruffin was more concerned with the passenger’s health than he was with writing a speeding ticket.

“After speaking with the driver of the vehicle, Sgt. Ruffin determined that the passenger, who was an elderly man, was in need of immediate medical attention,” Fitzhugh said. “He allowed the driver to proceed on to the hospital without further delay.”

The driver later returned to the Ahoskie Police Department to commend Ruffin for his professionalism.

“She admitted that she was speeding, but there were circumstances as to why she was traveling that fast,” Fitzhugh said. “She realized that Sgt. Ruffin was just doing his job and would not know there was a medical emergency until he performed the traffic stop. Upon realizing the urgent need of the passenger, Sgt. Ruffin allowed the driver to continue and she was able to get her father to the hospital in time for emergency medical services to be rendered.”

At the Nov. 8 meeting of the Ahoskie Town Council, Sgt. Ruffin was named as the town’s Employee of the Month.

“I can’t think of a better reason for someone to be named Employee of the Month under these circumstances,” said Ahoskie Mayor who made the presentation to Ruffin. “I’ve always taken pride in our police department and when you hear of this type of service that only deepens my pride.”

I have been an open and avid supporter of UNC football in this column for years. Over the last few... read more