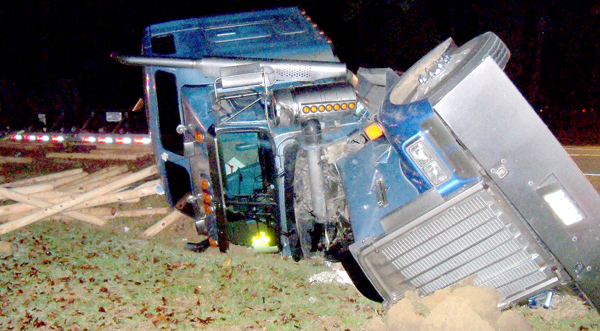 This tractor-trailer flipped on its side and lost a load of timber products on Monday evening on NC 305 in Rich Square. Contributed Photo

According to eyewitnesses at the scene of the single-vehicle crash, the tractor-trailer was traveling east on NC 305 at around 6 p.m. Apparently the driver of the big rig lost control after rounding a curve. The rig overturned on its side, causing a trailer full of shaved timber cores (used to make salt treated 4×4 posts) to spill onto the road and the adjacent front yards of at least three homes.

One eyewitness said the driver, who was not identified by the Roanoke Rapids office of the North Carolina Highway Patrol, did not require medical transport.

The accident did result in downed power poles as well as fluids leaking from the truck.

With the debris from the wreck plus the number of emergency responders working the accident scene, NC 305 was closed until after midnight. The owner of the big rig returned to the scene Tuesday morning to finish removing the timber from the residential yards.

A spokesperson at the NCHP Roanoke Rapids office would only confirm the time and location of the accident. She said it would take five business days before the accident report could be made available.

JACKSON — A non-profit organization is requesting a franchise from Northampton County to provide emergency medical services to the southeastern... read more