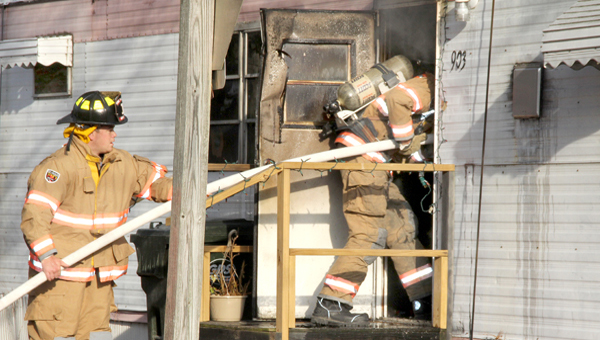 Ahoskie firefighters rushed to the scene of a blaze at903 Everett Street, located across from the playground ofAhoskieChristianSchool, at approximately 8:25 a.m.

Upon arrival they encountered heavy smoke coming from a singlewide mobile home located within a mobile home park owned by Ahoskie Free Will Baptist Church.

The firemen were able to quickly extinguish the blaze.

Ahoskie Fire Department Assistant Chief Eric Whitmeyer said the blaze began in the living room near a couch. Patrick Eure, who rents the home from the church, was not at the residence at the time of the fire.

Whitmeyer said there was heat and smoke damage throughout the home. Structural damage was estimated at $5,000 and an equal amount of damage was assessed to the contents.

Whitmeyer said the home is unlivable and that Eure had been contacted by the American Red Cross for housing assistance.