Back home in Sunbury 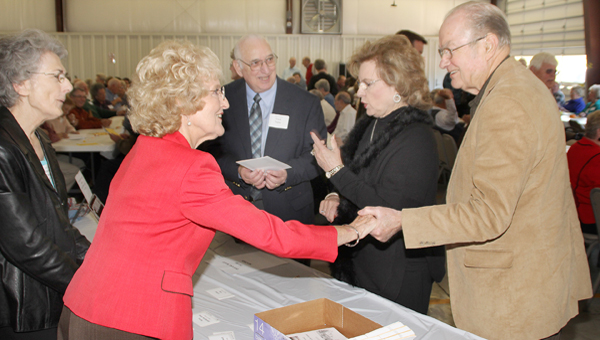 Apparently, Wolfe did not have the proud graduates of the old Sunbury High School in mind when he wrote that novel.

Numbering nearly 300 strong, those graduates from 1936-1962 did come home again on Saturday, filling the truck bays of the Sunbury Fire Department to capacity to reminisce about their days in school and share stories of their now adult lives.

They came from as far away as Alaska, Texas and Florida or from as close as just down the block from the fire station. Their current places of residence didn’t seem to matter as they were, on this day, exactly where they wanted to be – back home in Sunbury.

The all-school reunion was the brainchild of several members of the Sunbury High Class of 1956, especially that of Shirley Benton Buckley who currently resides in Raleigh.

“Our class has held a reunion for 20 plus years now,” said Joyce Hurdle Trump, now in public education in Suffolk, VA, who emceed Saturday’s event. “It was Shirley’s dream to invite all those who have graduated from Sunbury High School to gather together on this one day. We’re so glad you all chose to come.”

Trump also recognized Carolyn Baker Brothers for the table decorations, assisted by her husband, Charles Brothers. James Earl Brinkley and his wife, Elizabeth, took care of the reunion registration. He was also the “banker.”

Trump addressed her classmates from behind a historic relic, a podium presented to Sunbury School by the Class of 1932.

“Those of us who received a diploma from Sunbury High School probably did so from this podium,” she said. “It’s so amazing that somebody cared enough to see that this was preserved. This podium stays in Linda Hofler’s classroom at Gates County High School.”

She thanked the Sunbury Fire Department for use of their spacious new facility. Due to the overflow of vehicles attempting to park at the fire department, others were directed to park at nearby Beulah Baptist Church. A church van was used to shuttle reunion participants to the fire station.

“It’s always a pleasure to come home to Sunbury,” Trump said. “I wish our old school didn’t look the way it does today, but it’s to my understanding that something is in the works to save it. That building was a wonderful place, but where would we all be today without all the wonderful and splendid teachers we had while in school.

“People are amazed when I tell them I went to one school for all grades, first through graduation,” Trump continued. “What a wonderful experience it was. And now in my 37th year of public education, I wish I could duplicate for the children under my view the experience we all had at Sunbury High School.”

With the exception of the classes of 1936, 1937 and 1940, the reunion was attended by at least one representative from each graduating class. The Class of 1960 had the most graduates in attendance (19 of 25). The Class of 1955 had the largest percentage of graduates attending (eight of 13).

“As we are grateful for the opportunity to enjoy being together here today, it seems to me that we might remember just for a moment, as this is Veterans Day weekend, that many in this room have been part of military service, in times of peace and war,” Trump noted. “We thank you for that and we remember those who gave their lives in service of our country. We don’t need to take that lightly as we in this room would not enjoy the freedoms we have today had there not been men and women that were involved in military service.”

A delicious meal of pork barbecue, fried chicken, fried fish, shrimp and vegetables, prepared by Nixon’s Catering, was enjoyed by those in attendance…..but the biggest treat was the time shared by these proud graduates of Sunbury High School. Yes, they can come home again.

The present-day Sunbury High School was constructed in 1936, replacing Sunbury Consolidated School which was built in 1908. The last graduating class was 1961-62. The building was then used as an elementary school until it closed in 1998.