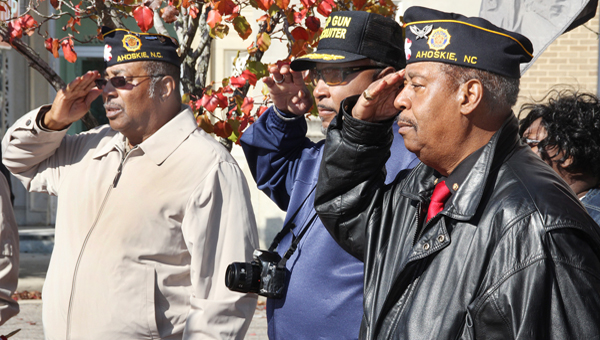 AHOSKIE – It’s not about the holiday, but rather the people for which the day so honors.

Bundled against a cold north wind, 100 or so local citizens assembled here Friday morning at precisely 11 a.m. to participate in the annual Veterans Day ceremony hosted by American Legion Post 102.

While the parade that preceded the event and the chance to socialize with friends and neighbors are drawing cards to the ceremony, it was the words of North Carolina Senator Ed Jones that shed the light of realism of why this nation honors its military veterans.

“It’s not about going to a sale today; it’s not about sleeping in late today,” said Jones, who represents the state’s 4th Senatorial District and served as the event’s featured speaker. “Some of us have forgotten where we came from and why we’re here. This is about the ones who have gone off to war and lost limbs or lost some part of the minds. This isn’t just a day off, ultimately it’s about those who lay at parade rest in our cemeteries and for those military veterans standing here today.”

He continued, “I challenge every one on this day and every day to seek out a military veteran and shake his or her hand and say thank you for serving this great nation and protecting these freedoms we enjoy so much.”

The nation’s “red-white-and-blue” was etched in Jones’ mind at an early age.

“When I was six years old and began the first grade, before I learned to write my name I learned the Pledge of Allegiance,” he recalled. “And then I learned there was a flag that went with that pledge. I learned that when you say the words of that pledge, you turn to the flag. That’s where the patriotic spirit within me first started.

“We had Selective Service back in my day, one where all young men were eligible to serve,” he added. “It was something that was born within us, it was not an option, you were to serve your country.”

Jones volunteered for that service, entering the US Army and was sent to Vietnam as a member of the famed 82nd Airborne Division.

“When you get into the military you don’t see the color of a person’s skin, you all become as one,” Jones noted. “It makes no difference if you’re rich or poor, black or white, we all went to war to fight so we can return here and enjoy the freedoms we still have today.”

Also taking part in Friday’s ceremony was Ahoskie Mayor Linda Blackburn. She dedicated the most recent memorial blocks and bricks installed at No Man’s Land Park by American Legion Post 102.

“I truly believe and hold dear to my heart that each and every day is Veterans Day, every day that I have freedom is Veterans Day,” Blackburn said. “Today is simply just one of many days that we always need to pay honor to those who sacrificed so much for our freedom. These bricks are a lasting way to remember our veterans.”

One such memorial block dedicated Friday was in honor of the late Lamont Gerald Lawrence, a graduate of Ahoskie High School. He served in the US Marine Corps from 1987-89 and died Sept. 11 of this year following a short battle against cancer.

Blackburn also mentioned her father, a World War II veteran. She said he was so proud to have served his country. That fact is forever etched in Blackburn’s mind after she enjoyed several opportunities to accompany her father to his military reunions.

“Those reunions allowed men like my father to reconnect with their old and cherished friends,” she said. “That would give him the strength to get through another year so he could attend the next reunion.”