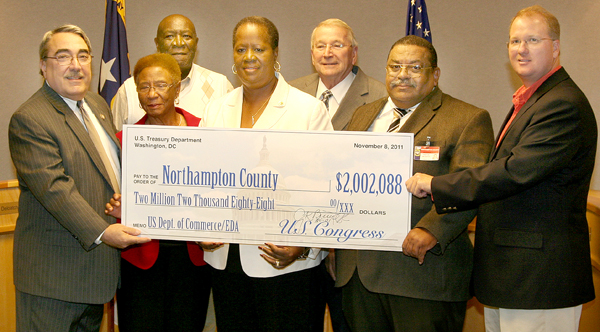 JACKSON— A much-needed grant has made its way toNorthamptonCounty.

On Tuesday, U.S. Congressman G.K. Butterfield (D-NC1) made a stop inJacksonto present the Northampton County Board of Commissioners and other county officials with a more than $2 million Economic Development Administration (EDA) grant that will assist in the proposed Enviva project.

“Today is a very happy occasion and I am delighted to be here,” Butterfield said before the ceremonial check presentation.

Butterfield was introduced by Northampton Commission Chairwoman Fannie Greene who expressed her anticipation for the grant and the project.

“We appreciate all of the support that you giveNorthamptonCounty,” said Greene. “We’re excited about our new project that is coming forth and we appreciate your gift that will help us to move forward with that project.”

The funds, tallying $2,002,088, will assist in water and wastewater improvements needed to serve theNorthamptonCommercePark, located nearLebanon Church Roadand NC 46 between Gaston and Garysburg, and the proposed Enviva LP wood pellet manufacturing plant. The project is expected to create 60 jobs with an average wage of approximately $17 per hour and generate $60 million in private investment.

“This is an example of agency funding,” Butterfield said. “The local economic developers, the county and others working together applied for an EDA grant and I supported it enthusiastically and other elected officials did so as well and we all banded together and supported the project and it was funded.”

He added the grant was funded by EDA from the Regional Office inAtlanta,Ga.

“I was told this Regional Office went the extra mile and I will certainly take that message back toWashington,” he said.

Gary Brown, Northampton County Economic Development director, briefly spoke about the project, which is the second project for the company in the area.

The product manufactured at Enviva plants inNorthamptonand Ahoskie will be destined for export toEurope.

“We anticipate the domestic market for (pellets) will grow as well,” he said.

Brown added the project has come together with the support of many, including those fromNorthamptonCounty, State Representative Michael Wray, Department of Commerce, NC Rural Center, the Department of Transportation, the Golden LEAF Foundation and Butterfield at the federal level.

“The project is one that hits all the right buttons, it’s green energy, it is renewable resources, it’s sustainable, it’s higher wages for the people in our community,” Brown said. “It’s one of those lasting investments.”

In his time before the dignitaries that gathered in the commissioners’ chambers, Butterfield spoke about the economy and the federal budget.

Butterfield said the federal government is spending $3.5 trillion each year to support the American way of life. Meanwhile, government revenues are only about $2 trillion a year triggering a $1.5 trillion annual deficit.

“The debt is now more than $14 trillion, approaching $15 trillion,” he said. “We’re borrowing 40 cents on every dollar.”

Butterfield acknowledged the need to stop the deficit from growing as well as cut spending.

“All of us (Democrats and Republicans) agree we’ve got to have a bold response to our fiscal emergency,” he said.

Butterfield said there are three ways to balance the budget—either cut spending, grow revenue or both. He added people hurt when spending is cut, but the government needs to cut spending.

Butterfield said 80 percent of the government’s spending goes toward Social Security, Medicare, Medicaid and national defense. The rest of the money, he said, goes to discretionary funds.

He added those who support the cuts to discretionary funds expect the states to pick up the tab. He said the same supporters have also suggested cuts to entitlement programs and eliminating Medicare altogether.

Butterfield said another serious proposal is to turn the Medicaid program over to the states.

“Those are some of the radical plans we’re beginning to get,” he said. “We’re trying to convince those that are opposed to the idea (of new revenue) that the only way we’re going to balance the budget is to cut some discretionary spending, some entitlement reform and get some more money in the pipeline from people who can afford to pay—the millionaires and billionaires—not the middle class, but the rich people, the one percent if you will.”

Veterans deserve our thanks

What is a Veteran? They are men and women who, for many reasons, donned the uniform of our country to... read more