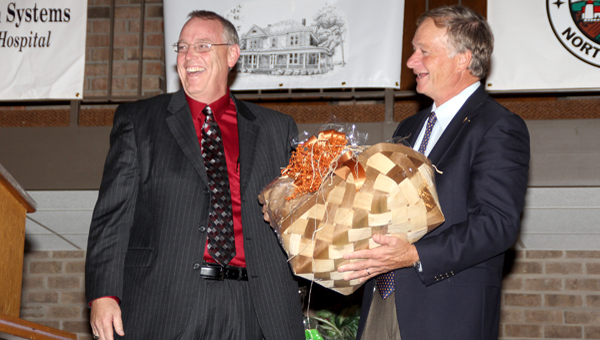 James Eure (left), president of the Ahoskie Chamber of Commerce Board of Directors, shares a laugh with Jim Perdue after presenting the CEO of Perdue Farms with a gift basket for serving as the featured speaker at Thursday’s annual Chamber banquet. Staff Photo by Cal Bryant

AHOSKIE – If there is one valuable lesson Jim Perdue learned from his famous father and grandfather it’s not to compromise values.

He shared that lesson here Thursday evening at the Ahoskie Inn where Perdue, president and CEO of Perdue Farms, was the featured speaker during the 68th annual Ahoskie Chamber of Commerce banquet.

“Somebody ask me one time what is your job with Perdue and I answered that I am the keeper of the values,” Perdue said. “It’s important that somebody keeps those values in line.

“Ours are quality, integrity, teamwork and sustainability,” he continued. “They were passed down from my grandfather when he started an egg business in 1920 to my father and then to me. We’ve lately added stewardship to that list of values – being good stewards to the land and the people. All these values are very near and dear to my heart.” 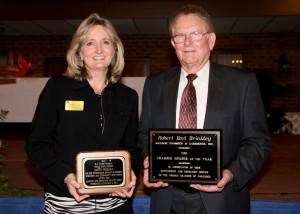 He added another key element to his company is vision.

“Ours is to be the most trusted name in food and agricultural products,” Perdue stated. “That trust is that we will always do right by our employees and by the environment, produce a quality product that is safe to eat by our consumers and to get that product where it needs to be on time.”

Perdue said he believed a great decision was made by his father over 35 years ago to expand the company from its traditional Maryland roots.

“This was the area chosen upon us looking for a place to site our third operation and it’s been a great marriage all though those years,” he stated, referencing the Roanoke-Chowan region. “We have a fantastic operation here, great chicken producers and great access to corn and soybeans.”

He called the Lewiston processing facility as one of the leaders within the company, taking an initiative to address carpel tunnel syndrome issues.

“Lewiston became a model of how to deal with that and how to prevent that,” Perdue said. “We’ve taken that model across our company.”

“We wanted to provide cost-effective care for our associates and eliminate the excuses they have for not wanting to see a doctor,” he stated. “Those excuses dealt with costs and losing time at work by having to take off to see a doctor. We addressed those issues by having a low co-pay and paying our associates their wages for the time they spend at the doctor’s office. That’s a win-win situation.”

The Lewiston plant, Perdue said, was the flagship facility for the company’s tray-pack production, the traditional packaging process for supermarkets. However, Jeff Stalls (plant manager) and his associates at the Lewiston facility are pioneering new packaging….Perfect Portions is an example, containing no styrofoam trays, instead it’s all clear packaging.

He said the Lewiston plant processes 1.95 million chickens per week (company wide it’s 13 million per week). But it’s not all about volume. Perdue bragged on the company’s Process Verified Program, the first in the nation to do so, where the USDA is updated on the humane treatment of the chickens, the veggie diet fed to the birds and the guaranteed tenderness of the final product.

“We found out that moving away from an animal by-product diet to a veggie-fed diet for the birds produced a better taste and tenderness of our chickens,” he noted.

Another part of the Perdue operation locally is the Cofield feed mill, where Jeff Sisler and his associates are making great strides with a new biomass boiler that produces steam to help drive that operation. Perdue also praised the work of Rick Burns with the Live Production site and the hatchery operation in Murfreesboro.

“This is a team effort,” Perdue said. “But of all the things I’m proud of here locally is our community involvement. Our associates devote a lot of time and energy here to very worthwhile organizations. We also help locally when there are challenges, and you’ve had some here lately with the hurricane and the tornadoes. You are a very resilient community here as you confront these challenges. We feel it’s an important thing for us to do when the need arises, to be there with you. Going forward we will continue to be active in your community.”

“We’re more than just chicken,” Perdue noted. “Perdue Farms is our food business, but we also have Perdue Agribusiness, the latter has grown into the tenth largest grain business in the United States. A lot of those exports are crops grown right here in North Carolina.”

Combining its traditional operation with the agribusiness side means jobs, lots of jobs locally. Perdue employs  roughly 2,100 local associates with an annual payroll of $52 million. Producer payments (money paid to those that grow the chickens) is $26 million annually while another $125 million is paid to northeastern North Carolina farmers for corn and soybeans.

Vann Rogerson, President and CEO of the Northeast Commission, introduced the guest speaker, recognizing the associates of  Perdue Farms and Perdue Agribusiness as community-minded individuals.

“Whenever there is a fundraiser to help the communities of this region, Perdue associates were there,” Rogerson said. “When there is a disaster, and, unfortunately, this area of the state has seen more than its fair share this year, who is always there to help…..Perdue associates. How do you put a value on that?

“When you think of the economic footprint in our rural area that a company like this has, we are so fortunate to have Perdue,” he added. “We recruit companies all the time, but I don’t think we could recruit one that would have the same impact that Perdue has on our region.”

James Eure, President of the Ahoskie Chamber’s Board of Directors, and Dan Joyner, the Chamber’s Executive Vice President, presided over the banquet.

Joyner recognized a special part of the Ahoskie Chamber.

Several individuals were recognized with special awards. Certificates of appreciation were given to Balaji Soundararajan, owner and manager of the Ahoskie Inn, former Ahoskie Chamber of Commerce Executive Vice President Jerry Castelloe and Brenda Allen, immediate past president of the Chamber’s Women’s Division.

Robert Earl Brinkley, retired from RBC Bank and now owner of REB Farms, was named as the 2011 Chamber Member of the Year. Brinkley has served on the Chamber’s Board of Directors since 2004.

Nancy Freeman, owner of Freeman Realty of Ahoskie, earned the Roanoke-Chowan News-Herald’s Front Page Award. She is currently in her sixth year as a member of the Chamber’s Board of Directors and was praised for her professionalism.