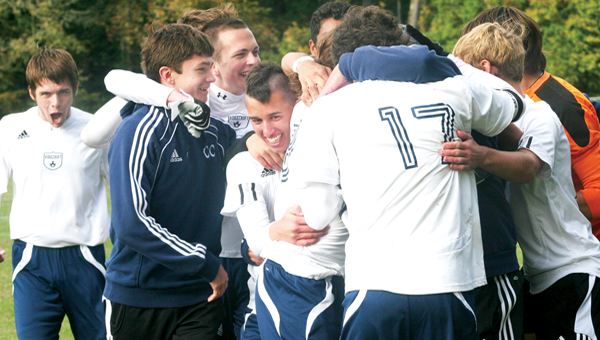 Several members of Ridgecroft School’s varsity soccer team join in the post-game celebration after the Rams blanked Grace Christian School, 3-0, on Saturday in Wilson to win the NCISAA State 1-A championship. Staff Photo by Thadd White

The win not only broke the four-year stranglehold on state titles by Greenfield School of Wilson, but it also earned the Rams their first ever boys state championship in any sport.

The final of 3-0 was also the semi-final score by the Rams over Trinity School of Durham/Chapel Hill on Friday.

Add to that the three Ridgecroft seniors: Michael Byrum, Drey Chrysostomou and Austin Foster who made the All-State team.

After two seasons of coming close, first in the semi’s in 2009, then in the finals a year ago: both times falling to eventual champ, Greenfield, Rams Head Coach Aron Martin was finally lifted onto the shoulders and carried off the field by his cheering players.

Where’s the Gatorade cooler to dump when you need it?

In a classic closer-than-the-final-score-indicates, Chrysostomou broke a stalemate in the second half with the only goal the Rams would need 54 minutes into the match.

He later added another with under six minutes to play and then Byrum added the clincher with less than two minutes left.

Meanwhile, keeper Jordan Harrell got the shutout in goal – the Rams’ sixteenth of the year – with plenty of help from the Ridgecroft defenders.

“It’s hard to find words right now,” said Martin as he and his team accepted the championship trophy and medals. “These young men have invested so much of their time, their energy, so much of their minds, and their emotions.

“This win isn’t just for them,” he added, nodding as the team soaked in the applause of the bundled-up Rams fans that made the trip to the game.

“But it’s also for those we represent back at Ridgecroft and for those that have gone before and come up short because they shed just as much blood, sweat, and tears as this group,” he added.

The Crusaders of Grace Christian were a much smaller size-wise than Ridgecroft, but a tad quicker.  Their speed was countered by Ridgecroft’s finesse. Add in the physicality of both teams and you’ve got the formula for one whale of a soccer match.

From the opening kick it didn’t take the Rams long to seize control. One minute into the match and Chrysostomou centered the ball to Byrum, but the striker’s header sailed wide.

The same duo was back at it a minute later, only this time the shot sailed over the crossbar. At the five-minute mark, Landon Larabee centered one to Chrysostomou, but again the shot was wide.

At the other end, Eduardo Hernandez of the Crusaders centered a shot, but it was stopped right in front of the net by Harrell.

It was a pretty clean half for the first 25 minutes before a Grace Christian player was whistled for the first of five yellow cards called on both teams all match. Ridgecroft’s first yellow came three minutes later.

For the scoreless first half Ridgecroft outshot Grace seven-to-four with one save for Harrell and four for the Crusaders’ goal-keeper.

“We moved some personnel around,” said Martin, “to try to deal with some of their more dangerous players; a speed decision.

“You’ve got to be careful, though, when you do that,” he added, “because it’s a little bit of a gamble, but today it was the right call.”

The second half began much like the first for Ridgecroft.  Byrum took the first shot for the Rams, this time on a breakaway, but it sailed wide-right again.

Grace came out as more the aggressor in the second half’s opening minutes; pressuring on defense and stepping up on offense. Jesus Arellano took the first shot for the Crusaders with Harrell making a clean, diving save.

However, Grace senior Adolfo Torres went down from a hard, but clean, Ridgecroft tackle and missed much of the second half and his absence was costly.

Then, as the match neared 55 minutes of play, Byrum beat a Grace defender to the ball along the left sideline. He raced past one defender while putting a spinning move on another.

Byrum then centered it to Chrysostomou who whirled on the final defender between he and the goalie and one-timed it into the net for the first goal of the game and the Ram faithful erupted in the stands as did the coaches and the bench on the sideline.

Physical play picked up after the goal with a yellow card apiece handed out by the referee. Grace then had two good chances at a tie: once on a header from a service from the sideline and again when Fernando DePaz’ shot sailed over the crossbar.

As the clocked ticked down to the final six minutes, Chrysostomou took in a sideline throw-in in the corner, weaved his way toward the box and sidestepped a defender before letting fly a two-bouncer off his left foot past the outstretched keeper and it was 2-0 Ridgecroft, 74:42 into the match.

For the next two minutes the Ram defenders kept the ball at or near midfield and the only time the Crusaders got near the box, their backs had the ball taken away.

It was only 30 seconds later that Byrum’s goal came as he took a throw-in from Larabee and punched it into the back of the net.

A minute and a half later the whistle sounded and the Rams had made school history. Martin made his way onto the field where he was hugged by his players before finally being lifted into the air in victory.

“He (the Grace goalie) just gave me an angle,” said a very excited Chrysostomou, of the goal that proved to be the game-winner. “When I saw it go in it was just such a big boost for me.”

“This championship is what we wanted,” said a smiling Byrum. “I’ve been playing here since seventh grade, came up through jayvee and been varsity ever since and we finally got it.”

“We lost our center-midfielder with 20 minutes left and when he went down the momentum shifted back to them,” said Pratt, “but we played it like a state championship match and I’m proud of my guys.”

“They put us under pressure,” said Martin, “but without sacrifice and adversity like we’ve been through all year nothing good ever comes.”

“I told them before the match that I’ve tried to inspire them to perform and execute and be good young men,” he concluded, “and without being emotional I also had to say that they’ve inspired me.”

Foreground from left, Michael Rice, the Rev. Laura Early and Lorraine Howard are surrounded by their enthusiastic “Dream Team” as... read more