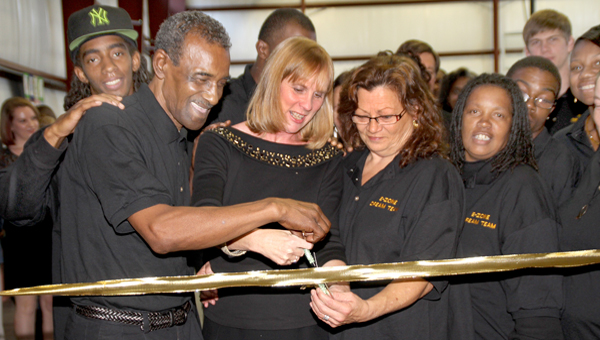 Foreground from left, Michael Rice, the Rev. Laura Early and Lorraine Howard are surrounded by their enthusiastic “Dream Team” as they cut the ribbon to formally open the E-Zone. Staff Photo by Cal Bryant

HEXLENA – Of all the thoughts running through the vivid mind of the Rev. Laura Early, one simple sentence on a modest wooden plaque accurately summed up her strong conviction towards a new business venture.

“The perfect day: going to bed with a dream, waking up with a purpose,” were the words inscribed on that slab of wood, one she presented here Tuesday afternoon of last week to a group of young men and women that comprise the inaugural E-Zone group at The Place of Possibilities, an extension of All God’s Children United Methodist Church of Aulander.

E-Zone is an entrepreneurial skills, marketing and business research program aimed at putting local people back to work.

“This past summer I was part of a one-week event at NC State University where among the presenters was the university’s Dean of Textile Design,” Early said. “In turn, his team came and spent eight days with us here. From that we were able to come up with the E-Team program. They, along with designers from New York as well as management with Glenoit Fabrics in Tarboro, were so pleased with the idea that we opted to offer this as an eight-month program.”

The E-Zone group – a collection of eight local young adults – perform classroom work weekdays from 8 a.m. until 12 noon. They then gather in what was a store room at The Place of Possibilities, now retrofitted with sewing machines, for two hours (1-3 p.m.) of technical work. They will take job readiness classes, offered through Roanoke-Chowan Community College. At the end of the eight-month program they will be prepared to enter the job force.

“It’s our job to give them the necessary skills to gain employment,” Early stressed. “Glenoit Fabrics, one of our partners in this endeavor who provided the industrial sewing machines, has agreed to put them to work or they can choose to enter a co-op program, one where they are self-employed in the textile industry.”

To make it all work, Early has tapped into the vast knowledge of two individuals who are deeply entrenched into The Place of Possibilities. Michael Rice of Windsor, a former manager with Proctor & Gamble, is the site manager at E-Zone. Technical skills are courtesy of Lorraine Howard of Woodland, who spent 30 years in the cut-and-sew industry.

“There are many talented people right here in our own backyard,” Early noted. “We are so blessed to have Michael’s and Lorraine’s skills.”

Calling the E-Zone idea a grassroots project, Early said it was the uneducated, poor, battered, scattered, barred, scarred and lonely people who made this all come true.

“This will be one of the greatest things to ever happen in Bertie County,” she boldly stated. “It will be great because the people here stood up and decided to make something happen instead of waiting for something to happen.”

She continued, “Our original intent here at The Place of Possibilities was to take our babies (teens and young adults) off the street and out of harm’s way, giving them positive role models to pattern themselves after,” Early said. “Now we see a need to put our babies back on the street, of course after giving them the tools – literacy and healthcare – they need to succeed in life, tools that can help them land jobs and, in turn, add to our tax base.”

The mission of E-Zone is five-fold:

Passion – “I can teach the skills, but the passion comes from within.”

The group has developed its first prototype project – the Medi-Pet, a juvenile diabetes medical kit (to store diabetes treatment supplies) in the shape of a stuffed animal. A recorded message in the animal’s paw (activated by touch) will remind the youngster of the need to keep a check on their sugar levels.

“This is a product I know we can develop,” Early said. “It’s meant as a big product. We’re already in contact with the Brody School of Medicine (in Greenville) for a possible partnership.”

For Early, reinventing the textile wheel domestically is a big deal.

“We want to bring cut-and-sew back to America, back to North Carolina and back to Bertie County,” she stressed. “This group of trailblazing members of the E-Zone will do just that.”

Dan Gerlach, president of Golden Leaf, whose organization awarded a $50,000 grant for the start-up of the E-Zone program, was also part of Tuesday’s ceremony.

“When Laura Early comes to talk to you, you quickly realize what she is able to see in others and what she sees is the face of God,” Gerlach said. “Faith without works is empty. How do we put these hands together to be the creative and innovative people that God meant for them to be? We do that through Laura Early. She believes in these young people. She doesn’t do what is easy, she does what is right. She’s the type that makes things happen.”

For more information on the E-Zone program or other programs offered at The Place of Possibilities, call 252-345-1144.