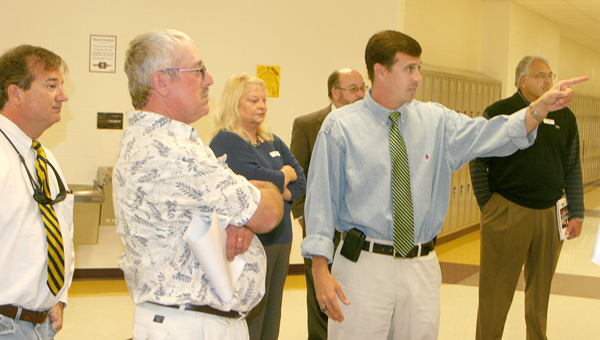 Corinth Holders High School Assistant Principal Chase Ferrell points to one of the features of his school while Bertie County Manager Zee Lamb (left), Bertie Board of Education member Alton Parker (second from left) and others look on during Wednesday’s tour. Staff Photo by Thadd White

Bertie County leaders took a tour of two public high schools during a trip Wednesday as they begin to envision a new Bertie High School.

A trio of Bertie County Commissioners was joined by two members of the Bertie County Board of Education, County Manager Zee Lamb, Superintendent of Schools Dr. Debbie Harris-Rollins and Economic Development Director Steve Biggs as they looked at Corinth-Holders High School in Wendell and Midway High School.

Hoggard said he was pleased with the opportunity to see both schools.

“It was good to see the schools in person rather than on an architect’s drawing,” he said. “It was a good trip for all of us.”

Parker said he felt he got a good view of the schools and that would help him as a school board member.

“Seeing a school on paper and seeing one in person is a lot different,” Parker said. “I think we got a better idea of the floor plans walking it. We also got to see students in the hallways and how they navigate the facility.

“I think both schools had nice, wide halls and that was important,” he added. “Both facilities were nice and I’m sure we’ll sit down and talk about them in the near future.”

The first stop for the boards was Corinth Holders High School. The three-year-old facility was designed by Hite Associates of Greenville.

At Corinth Holders, the delegation was met by members of the architectural firm as well as Assistant Principal Chase Ferrell and Ann Williams, retired Assistant Superintendent of Johnston County Schools.

The first to speak to the group was Jimmy Hite, who showed some of the outside designs that he believed were important, including the 100 percent metal roof and the four-foot overhang.

“The overhang protects the walls and keeps them dry,” Hite said. “That also makes them more energy-efficient.”

Another highlight of the facility was the three entrances which could be separate. The office is at the main entrance and there are also entrances at the gym and the auditorium. Each of the three areas can be locked off from the others allowing usage of one facility without access to the entire school.

Once inside, Ferrell talked about the day-to-day usage of the facility.

“It’s as operational and efficient as it can be,” the assistant principal said.

He took the group to what they call the “crossroads” which is an area that intersects the main hallways. Ferrell said he could stand in one position and see everything happening at the school. Parker and other members of the delegation said they saw immense value in that fact.

Williams then led the group to the attic which houses all the mechanical, technical and maintenance facilities. She said it was one of the best parts of the school.

All classrooms were heated and cooled by separate units which allowed a six-degree variable (chosen by the school system) for each classroom.

The group also saw the cafeteria, which houses all serving lines and equipment behind doors that can be closed to allow the eating area to be cut off for programs.

The group also saw an auditorium, a learning center and the media center as well.

Originally, the delegation was to tour Clinton High School, but chose instead to see Midway High School. The decision was made because the same architect designed both schools and Midway was closer to the design proposed for the new Bertie High.

Upon arrival, the group was met by Robbie Ferris, the architect and members of his staff, Sampson County Superintendent of Schools Dr. Ethan Lenker and others.

Administrators said the school was functional other than “a few minor issues.”

The group was taken into a central atrium which houses the cafeteria, but can be used for a variety of functions. They also saw the media center, auditorium and gym on the first floor before moving upstairs.

On the second floor, Midway has two classroom halls which would be duplicated at Bertie if this particular floor plan was chosen.

Following the tour, all members of the group were pleased with their trip.

Hoggard said while both schools were nice, it was hard to deny there was a difference.

“I liked the Corinth Holders school,” he said. “There were things I liked at both schools, but I felt like there were some advantages to that one. It was two stories, but can be sized down to what we need and I think it would be a great facility to have in Bertie County.”

The commissioners and school board will be discussing their choice for architect and floor plans at upcoming meetings.

Northeast advances to round two