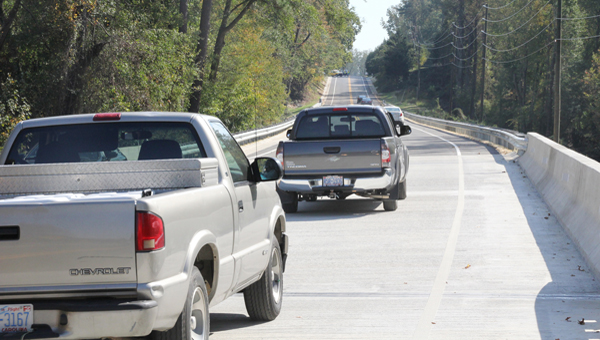 Regular traffic travels across the Stoney Creek bridges on US 13 south of Ahoskie for the first time in nearly four months after a major construction project officially ended on Wednesday. Staff Photo by Cal Bryant

AHOSKIE – After three months and 29 days, the wait is finally over.

US 13 at Stoney Creek reopened Wednesday afternoon. The reopening was preceded by a 1 p.m. ribbon-cutting ceremony, one where local and state dignitaries were in attendance.

“This is one of the first projects I’ve helped to dedicate and I’m very excited that this road will reopen today, just as I know many of you here in the area will attest,” said Matt Wood, who represents Division 1 on the North Carolina  Board of Transportation. “I know many of you have been inconvenienced by the detour over the last 90 or so days and you are probably a lot happier about this than we are.”

Among the local motorists forced to use the detour over the past four months was State House Representative Annie Mobley of Ahoskie.

“It was a five-mile detour, so this was an inconvenience to a lot of people,” Rep. Mobley said. “This bridge connects Hertford and Bertie counties and is a main corridor for our part of the state. This was a much-needed project and I want to thank all those who had a hand in this project.”

Assistant Bertie County Manager Morris Rascoe said he spent a lot of time over the last four months driving out of his way to reach north or south on US 13.

“First and foremost, the key to this project was that the safety of the citizens who travel this road was the top priority,” Rascoe said, referencing the old bridges that had fallen into a state of disrepair. “There is a lot of traffic on this road and now we have a better roadway and better bridges here along the main connection between Bertie and Hertford counties.”

“We’ve heard a lot of criticism about the Stimulus package when it was passed, but this is proof positive that this money has done was great good,” said Russ Haddad, speaking on behalf of First District US Congressman G.K. Butterfield. “Congratulations to the contractors and North Carolina DOT for a great project.”

During the construction process, the majority of US 13 traffic was rerouted along the back roads of southern Hertford County and northern Bertie County, namely Jernigan Swamp/Lee Jernigan Road and Williford Road. Despite those winding secondary roads, North Carolina Highway Patrol First Sgt. Todd Lane said there were no major accidents on the narrow highways.

“We had a few fender benders and a couple of vehicles that veered off the road and into ditches, but no major wrecks and no serious injuries,” Lane said. “I feel fairly certain that the residents who live along Williford Road are happy to see this project come to an end. While that road wasn’t marked as the main detour route, most all of the local traffic used it as a shortcut. Williford Road was extremely busy during this construction project.”

US 13 was closed June 27 on both sides of the bridges to begin the $2.5 million project that completely replaced the bridges, both initially built in 1934. The two old spans were removed and new ones built in their place by Sanford Contractors. The money was part of the Federal Stimulus Act.

The bridge on the south side of the project (Powellsville end) moved from a 120-foot long span to one that is now 168 feet long. The one of the north side was 70 feet and is now 112 feet. Both bridges were also raised by two feet.

In addition, both bridges were expanded from 30 feet in width (rail to rail) to 33 feet.

The twin bridges span the main body and overflow area of the Ahoskie Creek.