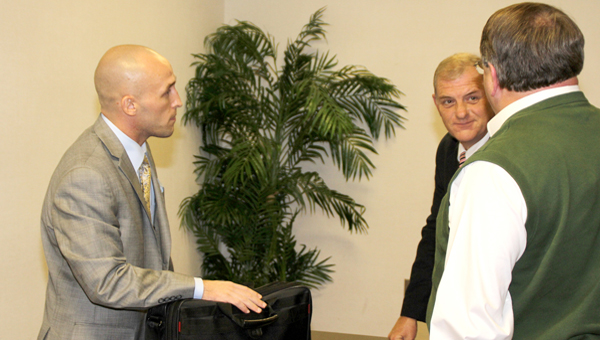 AHOSKIE – To land a big fish, you need the right bait. That analogy will be used to help recruit new businesses to Ahoskie/Hertford County.

At a public meeting held Thursday at the Ahoskie Inn, Casey Williams, Director of Sales for The Buxton Group,  unveiled months of research performed by the Fort Worth, Texas based company pertaining to the attraction and expansion of retailers here locally.

The Buxton Group was hired in an effort to develop a sustainable marketing program that will target and hopefully attract new businesses to the area. Earlier this year, the Ahoskie Town Council agreed to spend $11,000 towards a $25,000 contract with The Buxton Group. In December of last year, the Hertford County Board of Commissioners voted unanimously to fund $11,000 towards the project. The remaining $3,000 was paid by the Mid-East Commission.

“This is the beginning phase of this project,” said Ahoskie Mayor Linda Blackburn at the outset of Thursday’s meeting. “We will need to choose from this extensive list of prospective businesses. When I say we, that’s all of us, the town’s citizens, the town council. We need to have at least one more public input period to decide which way we want to go.”

Williams said Buxton’s methodology in performing its research of the Ahoskie/Hertford County retail trade/restaurant area was to first identify who those customers are, where they live and what is their value to the local market. That detailed information included what Williams referred to as “drive time” – how far the general public is willing to travel to shop, dine, etc.

He said the information derived from Buxton’s marketing research is so detailed that the company is able to project, within three percent, what a retailer’s first year volume will be before they break ground.  Over the past few years, Buxton has helped recruit approximately 40 million square feet of retail space for a list of over 2,200 retail clients.

For Ahoskie, Williams said Buxton’s goal was not only to help the town recruit new business, but to assist the existing ones with marketing strategies.

The first step in recruitment was to develop a trade area and then match the best retailers to fit that area. Household spending practices, data gained through over 350 consumer information sources, is stored in the world’s largest database at the Buxton home office.

For the Ahoskie/Hertford County trade area, Williams said a profile was developed of the local customer base to help Buxton understand the retail potential of the market.

“We performed a retail leakage and surplus analysis to determine what the potential sales are, what the actual sales are and what the gaps are,” Williams said. “Are people leaving this market or are people coming into this market.”

The “drive time” trade area encompassed 15 minutes of Ahoskie. Due to the rural nature of the local area, a broader trade area was also developed, one that extended up to 30 minutes drive time in all directions from Ahoskie. The leakage analysis helps track purchases of items in other markets even though there is an existing business within the drive time area that sells the same item.

“This is not the end-all list, it’s just the original list of good matches for Ahoskie,” Williams said. “These are retailers and restaurants that are in markets that look just like Ahoskie.

“There’s more to come,” Williams added, referencing additional possibilities. “Maybe in your next meeting we can narrow down exactly what you want to go after. Having a feel for that will allow us to target more on particular businesses.”

Once the local officials/citizens decide on which potential new businesses need to be targeted, Buxton provides contact information for that retailer.

“We provide all the supporting maps of the trade areas and other details, anything they typically need before entering into a new marketplace,” Williams noted. “We can prove to those businesses that they can be successful here.”

He encouraged local leaders that upon developing a list of potential new businesses to recruit, to have ideas in mind of exactly where existing buildings/properties are located before visiting with a new retailer/restaurant.

“What we help you do is market yourselves,” Williams said. “We’re not going to fish for you, but we will give you everything – the best bait, the best rod-and-reel – you need to catch big fish.”

He added, “The more retailers you bring in, the more you change the fingerprint of Ahoskie, it changes the way you look to other retailers. Even if you don’t get the one you may really want right now, it’s good to understand there are certain retailers that match well with others. You start with the ones that want to come and then build yourself up to attract the others.”

There was positive feedback among those surveyed about the recruitment of an Applebee’s restaurant.

“Applebee’s will open 100 new stores new year; how will Ahoskie stand out among the possible 5,000 locations they will initially look at,” Williams said about the popular restaurant chain. “You get them here by providing them a detailed analysis. We can give them that information….how many core Applebee’s customers there are here locally.”

Williams said the local data compiled by Buxton does show Applebee’s as a good match for the Ahoskie/Hertford County market.

“One of the challenges you face here is if you decide to go after an Applebee’s, a Ruby Tuesday or a Cracker Barrel type business is that while you are a good match with the correct amount of those core customers, those types of restaurants are only in a handful of markets that look like this in the Southern Atlantic region,” he stressed. “However, we can prove to them that they can be successful here.”

Williams said the planned Super WalMart coming to Ahoskie does make it more attractive to restaurant chains such as Applebee’s.

“I had asked Casey to think outside of the box for fits that will work in this community,” said Ahoskie Town Manager Tony Hammond. “That’s exactly what he did with Applebee’s and a few others he looked at.”

“When a Buxton analysis is brought to the doorstep of a potential new business for you, those businesses listen,” Williams said. “We put the Ahoskie/Hertford County market right in front of them. Once you guys identify the retailers or restaurants that you feel are strong matches, keep in mind that many of them are our clients that pay us a lot of money to tell them where to put their stores. We’re not going to tell you that they’re a good match when realistically they’re not.”

There was a great point made by one of the attendees at Thursday’s presentation, saying that Ahoskie lacks a good family restaurant. “We can get every hamburger we want, every chicken leg we want and a slice of pizza all across the town, but of the good matches you just presented I see there are two potential solid family restaurants, Shoney’s and Western Sizzlin. Would they be the first two we go after,” he asked.

“You’re right, there is a need for a good, sit-down style family restaurant,” Williams answered. “It’s Buxton’s job to identify the chains to see which of those are the best fit.”

“We start with the best matches, if we get them then hopefully others will follow,” Blackburn added. “We have to start some place. That begins with this list and we, together, will whittle this down.”

“Through our consumer databases we can tell you what products are in the highest demand,” Williams said.

The Buxton research also shows which companies already have a presence in North Carolina and are looking to expand.

As far as taking the next step in the recruitment process, Blackburn stressed the need for community involvement.

“This will not be a viable decision if it’s only made by five people,” she said, referencing the Ahoskie Town Council. “This needs to be a community decision and I encourage everyone, our local town and county citizens, our local business partners, the chamber of commerce, to become actively engaged in dialogue over this decision of which businesses we need to strongly consider. It really helps us that the Buxton Group lists many of those businesses we may consider as their clients. They have the information needed to help us in our recruitment process.”

The Ahoskie Town Council will receive an update on Buxton’s plan to date at their next scheduled meeting (10 a.m. on Tuesday, Nov. 8). The time, date and place of the next public meeting pertaining solely to the issue will be announced at a later date.

The mayor thanked the partners playing a role in bankrolling Buxton’s services, to include the Hertford County Board of Commissioners, Hertford County Economic Development, Ahoskie Chamber of Commerce, the Mid-East Commission and the Northeast Partnership.