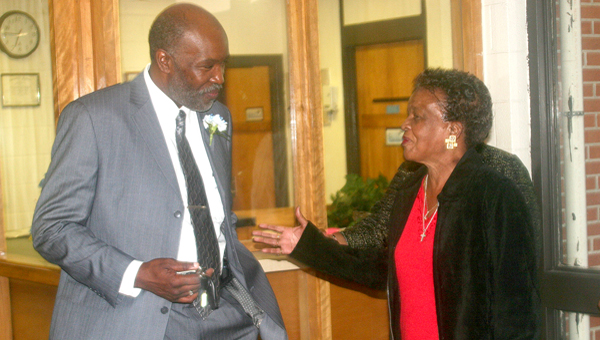 That was the message heard by Bertie High School Principal Carson Watford many times over last week during a reception welcoming him to Bertie County.

Watford was named Principal of Bertie High School in August, but was unable to take the post until fulfilling his obligations as Principal of Hertford County Middle School.

“I’m excited to be here and looking forward to the work ahead,” Watford said during the reception. “Everyone has been very welcoming and we’re hitting the ground running.”

Among those welcoming Watford were high school parents, Bertie County Board of Education members, central office staff and principals of other schools in the district.

A 20-year veteran educator, Watford served five years as Principal of HCMS. Before that he was a teacher in Prince George (Md.) Public Schools and in Bertie County Schools. He worked in In-School Suspension before being named Assistant Principal at Northeastern High School in Elizabeth City.

Watford also has experience as an Assistant Principal at Hertford County High School and as director of the Alternative School in Tyrell County.