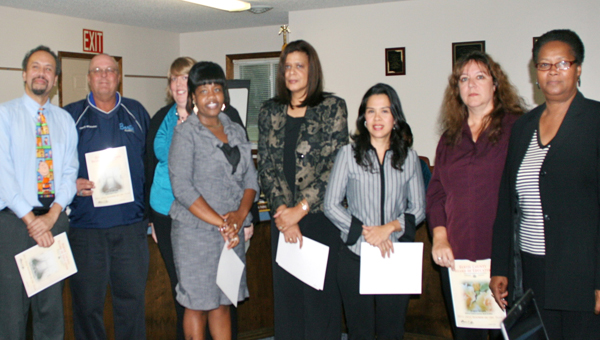 Nine teachers, one from each school in the district, were recognized for their excellent work in the classroom, their dedication to the profession and their skills.

Sheila Parker, a fifth grade math and science instructor at Aulander Elementary School, was chosen as the Bertie County Schools Teacher of the Year. Parker has been teaching for 25 years. She began her educational career in Raleigh in 1983 and moved to Bertie County in 1986.

During her tenure, she has taught second, third, fourth and fifth grades at the former Southwestern Elementary and at Windsor Elementary.  In 2006, she moved to Aulander Elementary where she serves on the School Improvement Team and the SACS Team.

She was also selected Bertie’s Teacher of the Year in 1999 at Windsor Elementary.

“I love children, especially the ones who are considered ‘at-risk’, or the ones other people turn their backs on because of the way they look or their unruly behavior,” Parker said. “These are the children that need me the most.”

While Parker was named the district’s Teacher of the Year, eight others were also recognized by their individual schools.

Maria Villamor was chosen as Teacher of the Year at Askewville Pre-K and More-At-Four. She is a National Board Certified teacher who believes in collaboration between school and home.

Veteran physical education teacher Randy Whitaker was chosen as Teacher of the Year for Bertie High School. He has been a teacher and coach in the school system for more than 22 years. He is a graduate of Bertie High School (1984) and East Carolina University.

Karen Sharpe, a 13-year veteran instructor, was selected as Teacher of the Year for Bertie Early College High School. She has spent the last two years as a science teacher at the school. She also served two years as Biogen Scholars Coordinator for the N.C. Division of Boston University’s Biotechnology City Lab/Summer Lab.

Bertie Middle School’s Teacher of the Year is Bryan Ruffin. He is a seventh grade math teacher who came back to the school system where he received his own education.

Instructors at the Bertie School of Science, Technology, Engineering and Mathematics (STEM) chose Walter Price to represent them as Teacher of the Year. Price teaches ninth and eleventh grade Honors World and US History as well as AP US History.

Colerain Elementary School selected Marlina Perry as Teacher of the Year. The eight-year veteran classroom instructor teaches kindergarten at the school. She has a degree from Elizabeth City State University and holds two master’s degrees from Cambridge College.

Heather Marshall was chosen Teacher of the Year for West Bertie Elementary School. The fifth grade math teacher is a strong believer in participating in school events to show her support of the students, parents and community.

Windsor Elementary School’s Teacher of the Year is Leola Mitchell, who teaches Exceptional Children at the school.

The school-level Teachers of the Year are chosen by their peers. Each of those teachers then interview for Teacher of the Year for the district. The winner is chosen based on experience, knowledge and other factors.

Each was honored by the Bertie County Board of Education during their regular meeting held earlier this month.

A wide assortment of vendors are on hand each Saturday at the Farmer’s Market in Windsor. There, the efforts of... read more