AHOSKIE – Less than 10 hours after the gruesome discovery of a lifeless body near here, the Hertford County Sheriff’s Office charged an Ahoskie teen with first degree murder.

Frederick Scott Williams Jr., 17, stands charged in the death of Jason Jermaine Harrell, 30, of Cofield, according to Hertford County Sheriff Juan Vaughan. Williams was arrested at 1 a.m. Wednesday at a residence on Rockpile Road in Bertie County near Powellsville.

Williams is currently being held without bond in the Hertford County Jail. His first court appearance is scheduled for Tuesday, Oct. 18.

Harrell’s body was discovered near a path off Ward Road shortly after 4 p.m. on Tuesday by a hunter. Vaughan said the body was approximately 500 yards up the path. Ward Road is located close to the Hertford-Bertie County line and intersects with US 13 adjacent to Highland Memorial Gardens.

“The hunter saw a car, later identified as victim’s vehicle, and noticed a sheet lying on the ground behind that car that appeared to be covering a body,” Vaughan said. “Upon making that discovery the hunter immediately contacted the sheriff’s office.”

The sheriff added that Harrell was last seen by his family on Sunday. The family alerted the sheriff’s office on Monday evening of his disappearance.

Vaughan said the cause of death was by gunshot. An autopsy was performed Wednesday morning at the State Medical Examiner’s Office in Greenville.

“From the information we gained during the investigation, we believe that the murder occurred at another location and the body was later placed near that path,” Vaughan said.

Vaughan added that the motive for the murder has yet to be determined.

“We had everyone in the department working on this case,” Vaughan said. “I would like to personally thank (Bertie) Sheriff John Holley and his deputies for their assistance in making the arrest on Wednesday morning.” 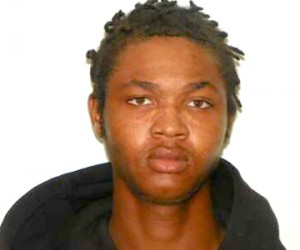 JACKSON — The bonds for the two men accused of beating and robbing an elderly woman have been increased after... read more