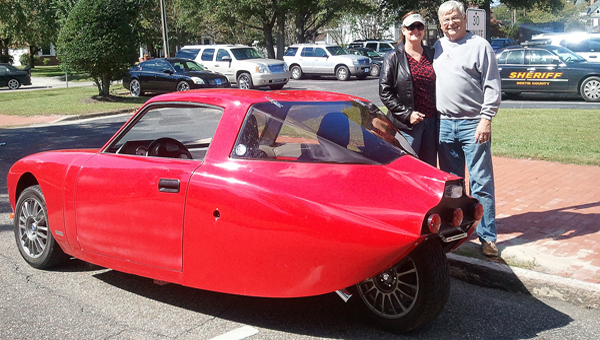 Harry Thompson and his wife, Barbara, stand next to his prototype three-wheeled vehicle, one capable of traveling 95 miles per gallon of gas. Contributed Photo

WINDSOR – A Bertie County native has an idea that potentially can bring jobs and innovation to Windsor.

Harry Thompson, a Windsor product who now runs a successful business in Melbourne, Florida, wants to bring an assembly plant for a new advanced technology vehicle to his home town of Windsor. The vehicle will be called Mitheus – Made in the United States.

Thompson designed and has assembled a prototype of an advanced technology vehicle that is a hybrid and will travel 95 miles per gallon of gas. The vehicle also has only three wheels – two on the front and one on the rear. It is designed to be a commuter vehicle for people who have long rides and require good fuel mileage.

In addition to the prototype, Thompson is currently working to have a production model made.

Bertie County Economic Development Director Steve Biggs said he and Thompson have been working over the past 10 days to move toward the assembly phase as they work to provide manufacturers for certain parts of the vehicle.

“The next step right now is finding manufacturers for rims, batteries, molding, those types of things,” Biggs said. “The plan is for the Windsor plant to be an assembly plant. It will not be a manufacturing plant. We have to find the right companies to partner with.”

In working towards building the vehicle, Biggs and Thompson drove it to meet with perspective manufacturers. The vehicle was also in Windsor much of the week where it garnered a lot of attention.

Mnemonics, the business Thompson operates in Melbourne, specializes in engineering and technology. It is there he began to develop the idea for the vehicle some two years ago.

Biggs and the Bertie County Economic Development office became involved in January 2010 because of Thompson’s desire to have the assembly plant in his home town.

“He loves Windsor and Bertie County and that’s why he wants to do it here,” Biggs said. “He wants the vehicle to help, if it can, the area he grew up in.”

Biggs said there was still  much work to be done as the vehicle moves toward production. A timeline for when it will the plant will be open in Windsor is still being developed.

“We’re excited about the opportunity this could provide in Bertie County,” Biggs said. “I think it will also be an opportunity for some of the car companies that went out of business to get back into business with a new vehicle concept.”

WINDSOR – Add the August 23 earthquake to the laundry list of natural disasters that have caused damage in Bertie... read more