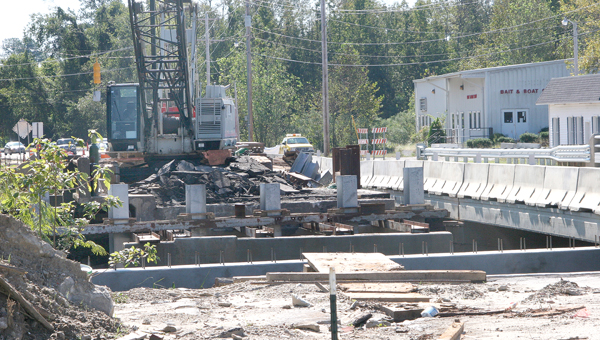 Work on the US 17/King Street bridge in downtown Windsor was scheduled for completion on May 15. It may now take as long as April of next year to finish the project. Staff Photo by Thadd White

WINDSOR – What some would call the longest on-going highway project in North Carolina remains far from finished.

North Carolina Department of Transportation Resident Engineer Shawn Mebane said earlier this week that there is still much work to be done on the bridge across the Cashie River on King Street in Windsor.

“I think it will be early April (completion day) unless something changes,” Mebane said.

Phase one of the project, completing the north bound lane, was finished on time, but the project got behind schedule before the second phase could even begin.

Originally, a contractor hired by the town of Windsor to move water lines caused a delay. Since, then the problem has been compounded.

“Our contractor has been extremely slow and not responsive,” Mebane said.

The contract was awarded to Kirkman Construction of Huntersville. During phase two, the town and DOT have received numerous complaints about the lack of progress on the bridge.

While work was continuing at the end of this week, there was no one on the job site Friday, Monday or Tuesday according to Mebane.

The two-phase project was done in order to keep at least one lane of the bridge entirely open. The decision was made at the request of the Bertie County Commissioners and the town of Windsor. Both entities were concerned about closing the bridge because the bulk of the town’s population would have been on one side with local fire and police while Bertie Memorial Hospital would have been on the other.

The project was scheduled to have been completed on May 15 of this year, but has already gone five months over schedule with no end currently in sight.

The total projected cost was $2.2 million, but Mebane said that figure will definitely be low.

“It will definitely be more than that,” he said. “Some of the issues are not the contractors fault and some will be the contractor’s responsibility.”

Windsor Mayor Jimmy Hoggard has been working on the issue at the request of his citizens and board. He said Thursday that an April timeline was simply not satisfactory.

“That’s just not acceptable,” he said. “I have no problem with DOT. They have tried very hard to make the best of a bad situation.”

Hoggard said he knew the town had caused some delay, but that the current overrun of time was beginning to wear on the town’s citizenry.

“People are tired of it and rightfully so,” he said. “We’ll be working with DOT to see if there’s anything we can do to get this project finished.”

WINDSOR – Survivors of recent weather-related disasters in Bertie and Hertford counties are targeted once again….this time in a good... read more