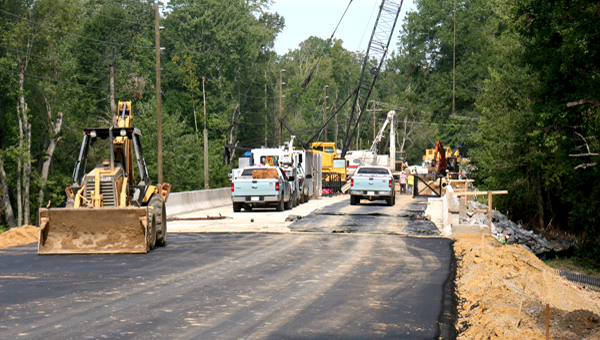 Sanford Contractors are nearly finished with a project that replaced two aging bridges spanning the Ahoskie Creek on US 13. The project began June 27 and is scheduled to end the week of Oct. 17. Staff Photo by Thadd White

POWELLSVILLE – The trip from Ahoskie to Windsor will soon be shorter.

Resident Engineer Scott Emory of the North Carolina Department of Transportation reported recently that work on the two bridges which span Ahoskie Creek on U.S. 13 are nearing completion. That work began June 27.

“All the bridge work itself is complete for both bridges,” Emory said. “They have to come in and do paving, the guard rail, build the shoulders and finish the project.”

The new bridges were scheduled to be completed October 22 and Emory said he believes U.S. 13 will open between Powellsville and Ahoskie sometime during the week of October 17-21.

The work was a near $2.5 million project that completely replaced the bridges, both initially built in 1934. The two old structures were removed and new ones built in their place.

The bridge on the south side of the project (Powellsville end) moved from a 120-foot long structure to one that is now 168 feet long. The one of the north side was 70 feet and is now 112 feet.

“That will help alleviate some flooding issues in the area,” Emory said. “It will give a little more drainage room.”

In addition, both bridges were expanded from 30 feet from rail to rail up to 33 feet.