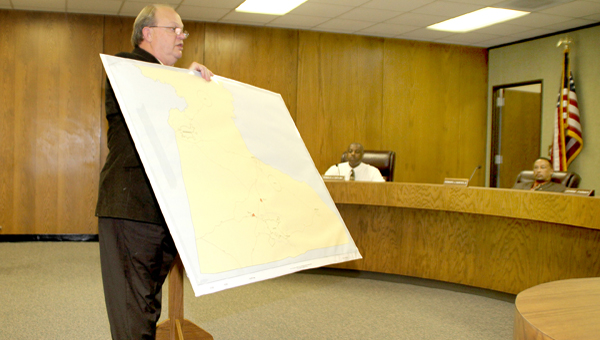 Ahoskie Town Manager Tony Hammond uses a map to show the Hertford County Board of Commissioners three potential sites in or near Ahoskie to possibly locate the courthouse construction project. Staff Photo by Cal Bryant

WINTON – An answer as to whether Hertford County’s new courthouse will remain in Winton or move to Ahoskie or Murfreesboro could come within 45 days.

Monday morning was Ahoskie’s turn to make its formal bid for the possible relocation of the Hertford County Courthouse construction project.

Currently, the county’s governing board is weighing its options on possibly moving that project from county-owned property in Winton. This comes after Town of Winton officials denied last month a parking variance submitted by the county that would address parking issues during and after the courthouse construction process is complete.

At Monday’s meeting of the Hertford County Commissioners, Ahoskie Town Manager Tony Hammond told the board that the town was interested in being the site of the courthouse.

“Building the proposed courthouse in Winton would have far less potential economic impact for Winton or Hertford County,” Hammond said. “Building it in or near Ahoskie would have a greater impact because of businesses that would be willing to locate in a larger city, a city that provides restaurants, the hospital, things of that nature.”

Hammond said upon contacting Hertford County Manager Loria Williams, she said the commissioners had set forth criteria in regard to the size of property and location. He said the town’s original presentation to the county included five properties that met the requirements.

“A couple of those properties dropped out due to their location,” Hammond said. “The final three we discussed were the Stuart Pierce property (NC 561 West near the Ahoskie Inn), the Mike Basnight property (on Hertford County High School Road) and the Freeman property (on US 13 North). They all meet the criteria.”

Hammond said the Pierce and Basnight property are currently served by the Ahoskie’s water and sewer infrastructure. He further stated the Pierce property is served by NC 561 and the US 13/NC 11/NC 42 corridor, which is being studied by NCDOT for widening to four lanes. The Freeman property has county water availability, but the town’s sewer line stops 2.2 miles away (at Bojangles).

He stressed the town’s new wastewater treatment plant is capable of handling 1.6 million gallons per day and designed to handle growth such as the courthouse facility. Hammond added that in 2006, the Ahoskie Town Council approved an Economic Development Grant that benefits and promotes commercial/business development in the town. Should Hertford County government officials opt to move the courthouse construction project out of Winton, Hammond said Ahoskie was ready to accept that project, as the Town Council agreed at their last meeting to waive all water and sewer capacity and connection fees.

“Ahoskie is looking at this potential relocation of the new Hertford County Courthouse from an economic standpoint, but the bottom line is what’s best for all of Hertford County,” Hammond said. “The county commissioners must decide this issue, whether it’s best for this project to remain in Winton or whether it’s economical and feasible to do this in Murfreesboro or Ahoskie.”

Should the county consider the Freeman property, Hammond pointed out there would be the need to construct a grinder station and 2.2 miles of force main sewer lines at a cost of $550,000. If a gravity sewer line and pump station is used, which would allow for the addition of other businesses to tie on to the system along that 2.2 mile stretch, the cost of that project is estimated at $1.5 million.

At the end of Hammond’s presentation, commission chairman Johnnie Ray Farmer said the county was in the process of studying all of its options.

“From what we’ve discussed up until this point we’ll need about 45 days (to complete the study),” Farmer said.

The county has mailed letters to those that have expressed an interest in having the courthouse construction project potentially moved to their property. To date, the county has seven different proposals that meet the criteria set forth by the commissioners. Those letters ask for the landowner’s name, tax PIN (Property Identification Number), the name/address/phone number of the contact person, acreage available for purchase, the cost per acre, the cost per acre with road frontage, cost per acre if the purchase involves 25 or more acres, water and sewer availability/capacity (proximity to connection, line size, connection fees, etc.) and the general topography, drainage and character (flat, hilly, open land, woods land) of the property.

“We’ve had some properties that did not meet the criteria,” Williams said. “They were either uncleared land or less than 10 acres in size. Letters have been sent to those meeting the criteria. We are asking for the information to be returned to us by Oct. 10.”

Williams added that information will be shared with the commissioners at their regularly scheduled mid-month meeting (7 p.m. on Monday, Oct. 17).

Chuck Revelle, who serves as legal counsel to Hertford County government, confirmed that seven letters were mailed. He also reminded any Hertford County citizen that has property they would like considered for this project is welcomed to contact the county manager’s office and they will be sent a letter as well.

“The search is not limited to just those who have already expressed an interest,” Revelle said.

Commission Vice Chairman Curtis Freeman said he wanted to go on the record to clear up a misconception that the possible relocation of the courthouse construction project was only tied to the county’s inability to secure a parking variance from Town of Winton officials. Town leaders denied that request at their Sept. 13 meeting.

“We’re not taking these steps just because of our situation with the Town of Winton,” Freeman said. “We are also looking down the road at future growth (of county government offices). Eventually, we will outgrow our buildings – DSS, the Sheriff’s Office and jail – here in Winton. I may not see it in my lifetime, but we’ll eventually have to build new buildings. This board has a charge to look out for the future of this county and future county government officials.”

At the commissioners’ most recent meeting (held Sept. 19), they heard a formal presentation from Murfreesboro Mayor John Hinton who promoted his town as a possible site for the new courthouse.

WINTON – FEMA has decided to stick around a bit longer. To continue helping survivors with property damage and other... read more