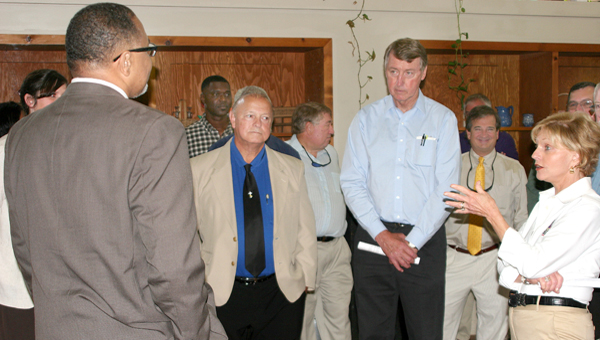 WINDSOR – We are getting better, but there is a long way to go.

That was the message sent to North Carolina Gov. Bev Perdue by Bertie County officials Friday morning when she visited the county.

Perdue was making her fourth disaster-related visit to the county in just over a year, having toured the county during the flooding caused last year by the remnants of Tropical Storm Nicole, then returning in the aftermath of April’s tornadoes. Friday marked her second trip in the wake of the Hurricane Irene, which struck Aug. 27.

She visited Brown’s Farm in Colerain and then went to the Federal Emergency Management Agency’s Disaster Recovery Center in Windsor.

At the DRC, Perdue said she was on hand to listen.

“I want to hear what is happening,” she said. “I want to listen to your needs and concerns.”

Bertie County Commission Chairman L.C. Hoggard III said the county had endured a lot of hardship and many people had suffered.

“We’ve been through a lot and we still have a lot of people who are suffering,” Hoggard said. “One issue we have is that we are proud people. It’s sometimes hard for people to come and ask for help even though they need it and they deserve it.

“We need to help people understand that it is good to seek help,” he added.

Hoggard said the people of Colerain were particularly unnerved after all of the weather-related concerns. Colerain was one of the hardest hit areas of Bertie County by twin tornadoes in April.

“There are people who, when it clouds up and storms come across, their entire demeanor changes,” Hoggard explained. “They have mental scars as well as physical ones and then need medical help.”

“After a traumatic event, it sometimes takes time to process the events and people realize they need help much later,” she said.

Perdue said she knew that was true.

“The people of Colerain are still processing the death and loss of the tornadoes in April,” the Governor said.

The group, which also included mayors Jimmy Hoggard of Windsor and John Pierce of Askewville, discussed the need for people to register with FEMA to receive any type of aid.

“We really need people to register,” Perdue said. “Whether or not they think they will get help, they need to register to begin the process.”

The conversation then shifted to the need for assistance for farmers who have lost so much during Hurricane Irene.

Hoggard said it was imperative that Bertie County farmers receive help in the wake of a disaster that caused $24 million in damages.

Perdue said there wasn’t much that could be done from the state level and that is why she had asked former Congressman Bob Etheridge to help the state “navigate” through the U.S. Congress to get assistance.

“We need to get help with the formula for our farmers,” Perdue said. “The formula is based on yield and that will be down because of the storms.”

The governor said the state would seek help for farmers because some yields were down. Etheridge said there were still concerns about peanuts, potatoes and other crops.

Hoggard said the county was still recovering from all of the weather issues.

“Keep us in your prayers because this is going to be a long recovery process,” Hoggard said. “Are we doing okay? Yes, but not really. It’s going to take a long time.”

“I’ve never seen a county go through what this one has with floods, tornadoes, hurricanes, drought and an earthquake,” she said. “We don’t have a magic wand, but we want to help. The people here are mighty courageous.”

Murder trial under way in Windsor

WINDSOR – An Edgecombe County murder case is currently being tried in Windsor. Standing trial is Antwan Pittman, who is... read more