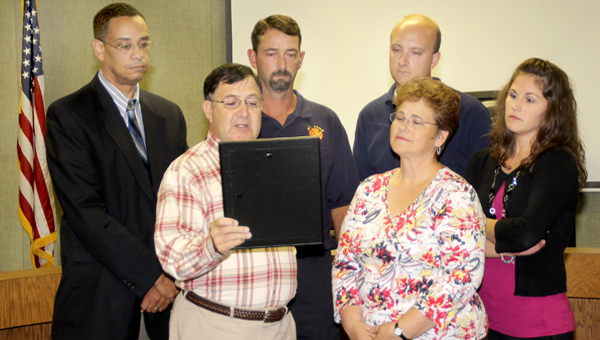 Johnnie Ray Farmer, chairman of the Hertford County Board of Commissioners, reads a resolution in memory of the late Charles Wesley Liverman, a long time public servant of the county who died July 1. Looking on are Liverman’s wife, Cynthia (right foreground) and, from left, Commissioner Bill Mitchell, St. John firemen Jarrett Dawson and Russ Joyner, and Anelle Joyner. Staff Photo by Cal Bryant

WINTON – Nearly three months have passed since the sudden and unexpected death of Charles Wesley Liverman, but his memory remains alive and well.

“I’ve worked with Wesley in the past and Hertford County suffered a tremendous loss with his untimely death,” said Commission Vice Chairman Curtis Freeman. “He was serious about protecting the lives and property of those living in the St. John fire district as well as everyone in Hertford County. He put all he had into firefighting and teaching others how to become better firefighters.”

“I’ll never forget that during the early stages of my desire to seek the office of county commissioner I met with Wesley to learn more about how fire departments serve the citizens of this county,” Commissioner Bill Mitchell said. “What I thought was going to be a brief conversation turned into a couple of hours of me being versed on what exactly goes on. He explained to me about all the different fundraisers fire departments hold to support their departments. It was serious business to Wesley Liverman.”

Over a span exceeding 30 years, Liverman admirably filled the role of a public servant. That loyal service began as a junior firefighter with the St. John department. He rose through the ranks, serving as department captain for two years, assistant chief for five years and fire chief for 22 years.

In addition to his firefighting duties, Liverman worked as an EMT and a telecommunicator, including a stint as a dispatcher for the Hertford County Sheriff’s Office.

Liverman was not shy when it came to sharing his vast knowledge as an emergency responder through his role as Coordinator of Police and Fire Training at Roanoke Chowan Community College. A memorial in Liverman’s honor was held Sept. 14 at the college.

Johnnie Ray Farmer, chairman of the Hertford County Board of Commissioners, read the resolution and presented a framed copy to Liverman’s wife, Cynthia. He said he had always admired Liverman’s dedication to serving those within the St. John Fire District and his love for all of Hertford County.

“Wesley Liverman served the community well for many years in many capacities,” Farmer read from the resolution. “These years have been marked by exemplary dedication to the best interests of the community as he worked for the betterment of his community and county.”

Farmer continued, “Wesley Liverman justly earned the respect, admiration and high regard of all with whom he came into contact, and this county has sustained a great loss in his untimely death. The Hertford County Board of Commissioners, speaking on behalf of all our citizens, hereby extends to the members of his family this expression of sincere regret for his loss and the hope that they will be consoled by the memories of his fine life and achievements.”

Como Fire Department, represented by Brian Williams and Phillip Williams (left), is presented a certificate of appreciation for the department’s... read more