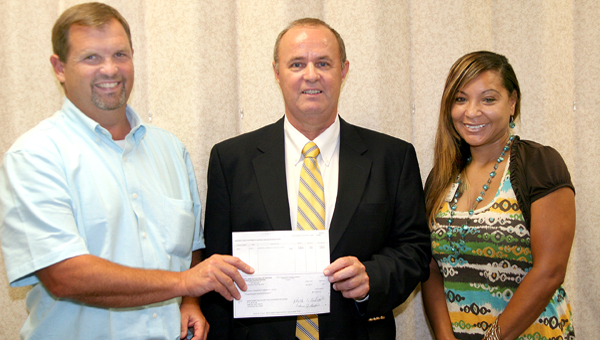 AHOSKIE — Several agencies and organizations in the Roanoke-Chowan region once again benefited from the Community Benefits Grants and Health Initiatives program.

The program, made possible by the University Health System foundation, gave out $100,000 in grants this year to local efforts ranging from mobile food banks to diabetes education. A local Community Benefits Grant Committee decides upon those applicants who receive a grant.

Sue Lassiter, Roanoke Chowan Hospital president, said the hospital was fortunate that the University Health System Foundation received the benefit in getting the grant money out into local communities in Northeastern North Carolina.

“It truly is a blessing that they are able to be so generous,” she said.

Recently, those selected to receive the grant gathered in the Chowan Room at Roanoke Chowan Hospital to receive a check for their initiative. Kahla Hall, director of Community Benefit for University Health System, and Dr. Michael Alston, chair of the Roanoke-Chowan Foundation’s Mission Committee, presented the checks to the recipients.

Liz Reasoner, executive director of Food Bank of the Albemarle, spoke about how the grant has helped that organization’s effort.

“We’re grateful to the foundation for the funding that has provided resources for our mobile food pantry to Northampton County,” she said. “We were able to expand services to Jackson and to Rich Square through the funding that we received. That was an area that, as far as we’re concerned, was underserved.”

Reasoner added that community partners were able to bring in health screening services as well.

Roanoke Chowan Community Health Center President and CEO Kim Schwartz said there has been success with the help of the grant in diabetes education.

“We are seeing a reduction in the key indicators in diabetes in our region, and that has happened over the last five or six years,” she said.

Schwartz said they have also had success with Kids Camp, which focuses on children in the area who are challenged with obesity. The program is in its fourth year.

“We were really pleased with the outcome,” she said. “We could not have done it without your help.”

“We’re incorporating and improving efficiency in first time responders through this grant,” she said. “We’re placing AEDs (defibrillators) in the area and incorporating health education.”

“Roanoke Chowan Hospital is a jewel in Northeastern North Carolina,” he said.

GATESVILLE – They usually say, ‘Quiet, Men at Work’. But the George Privott-led construction of a winner at Northampton-East is... read more