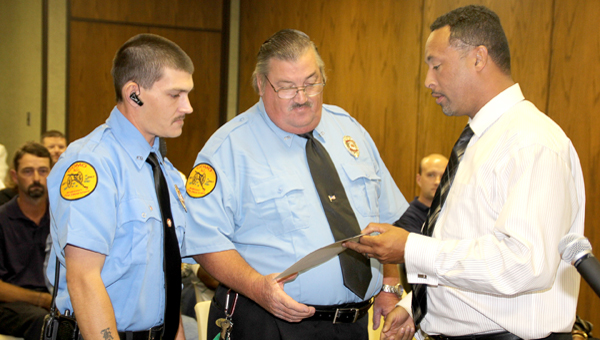 Como Fire Department, represented by Brian Williams and Phillip Williams (left), is presented a certificate of appreciation for the department’s true spirit of volunteerism from Hertford County Commissioner Howard Hunter III. Each of the county’s nine fire departments were honored at the Sept. 19 meeting of the commissioners. Staff Photo by Cal Bryant

WINTON – No one wishes to see a bright red fire truck, its siren blaring, pull into their driveway….when that scenario unfolds, it’s normally not good news.

However, Hertford County citizens are fortunate to have highly skilled and trained firefighters standing at the ready when that call for assistance arises. No matter the time of day or night, no matter the circumstance, firemen representing nine departments across Hertford County will answer that call.

In a show of appreciation for that true spirit of volunteerism, Hertford County local government paid tribute to each of those fire departments on Sept. 19 during a meeting of the board of commissioners. This special salute came on the heels of the county’s leaders adopting a resolution at their Sept. 6 meeting to recognize Sept. 11-17 as National Fire Prevention Week.

“It’s important to this board that we do individual recognition for each of our fire departments in honor of all the hard work they do on behalf of our citizens,” said Hertford County Manager Loria Williams. “Not only do they stand ready to help during catastrophic events, but on a daily basis as well.”

Hertford County Emergency Management Director and County Fire Marshal Chris Smith presented a certificate of appreciation to each fire department. That certificate read, “For outstanding performance and faithful dedication to the citizens of Hertford County.”

“My job as Emergency Manager and Fire Marshal is a lot easier because of what these firemen do for all of us,” said Smith. “Being a volunteer fireman myself, I know first hand of the man hours and time it takes from your family to do what they do. I can count on each and every one of them when a need arises, and we’ve had quite a few needs this year, from the tornado back in April and the hurricane just last month.”

Commission members took turns presenting the certificates of appreciation to the following:

“My mother had some damage at her house because of the hurricane (Irene) and when the (insurance) adjuster came by the tree was off the barn and most of the debris had been hauled away,” said Commission Chairman Johnnie Ray Farmer. “The adjuster asked me how much did it cost to remove that tree. I told him, nothing….the next morning my local volunteer fire department was up here, they cut the tree, got it off the barn, raised the root back up and we had friends and neighbors to help clean-up. The adjuster couldn’t believe that people did all that work for free, then I found out that he wasn’t from North Carolina.

“My point is,” Farmer continued, “that every time we have a need following a storm or a crisis, our volunteer firemen are there. They also usually beat the DOT crews out on the road, getting trees blown down off the road. Our firemen are very community minded and we appreciate each one of them so much. Not every community in our great country has fire departments that are so active and so dedicated as the ones were have here in Hertford County. These certificates are just a piece of paper, but I can tell you on behalf of our citizens and my fellow commissioners this appreciation comes deeply from our hearts because we know you stand on the front line to protect our lives and our property. God bless you all.”

“I use to be a volunteer fireman years ago,” said Freeman. “For those who are not firemen and have never seen these guys work, you need to know they are professionals and they care about you and your homes, your property. I’ve seen some of these guys go into burning buildings and don’t hesitate in doing so. Some may say that it’s because of our military that we, as American citizens, are able to sleep comfortably at night. Well, my fire department is why I can sleep at night because I know they’re there to answer the call.”

“Not only do they fight fires, they also back up our rescue squad,” Hunter noted. “They’re out there at motor vehicle accidents and are there when the (medical) helicopter lands. I thank you all for your great service to our county.”

“They also lend a helping hand in community service projects,” Gatling said. “I’ve utilized them for such projects within our public schools. Thank you for not only protecting our citizens, but for teaching fire prevention to our children.”

“These guys are very serious about what they do,” Mitchell noted. “It’s a business for them and they take it upon themselves to conduct fundraisers to purchase needed equipment. I have guys that work in my office who are firemen. When that pager goes off, they take off and it’s understood what they’re doing. I salute you guys and what you do for all of Hertford County.”