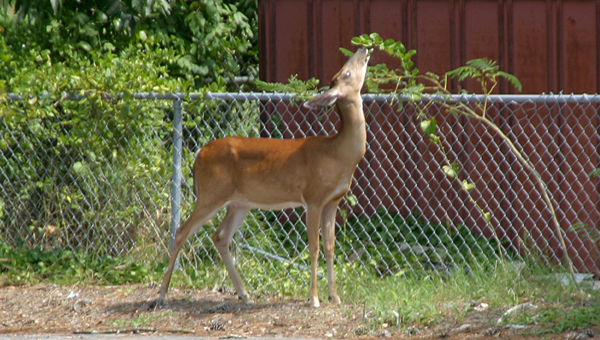 A doe stretches for food along a fence line in the rear parking lot of the Roanoke-Chowan News-Herald in Ahoskie. Town officials are studying the possibility of allowing deer hunting within the municipal limits. File Photo by Cal Bryant

AHOSKE – Will this Hertford County town join a growing number of municipalities statewide that allow deer hunting within their corporate limits?

While the measure cannot be put in place in time for the 2011 hunting season, members of the Ahoskie Town Council have directed Town Manager Tony Hammond to further study the issue and report his findings back to the board.

“This is an issue that came up and I’m just putting it before you (Council) to see if you want me to explore it further,” he said.

Hammond stated he has researched other North Carolina municipalities and discovered that a few did allow deer hunting, by bow and arrow, within the town’s corporate limits – Smithfield, Burgaw, Concord, Elkin, Fairview, Kannapolis, Kill Devil Hills, Mooresville and Nags Head, to name a few.

“It is allowed because these municipalities are being overrun by deer,” Hammond said. “These deer are impacting gardens, flower beds and things like that.”

“There are some that allow deer hunting year-round, but it would be my suggestion that if we decide to go with this that we allow it only to take place during hunting season,” Hammond replied. “Plus, you have to designate the areas of town where deer hunting is allowed, you don’t approve it in a broad area. You’ve got to identify the areas you want to open for deer hunting and send that information to the state (NC Wildlife Commission), they have to approve your plan and then send it back to you as an approved urban hunting area.”

“Yes sir, it’s strictly bow hunting,” Hammond replied. “But you need to understand that under the state’s bow hunting regulations this does include the new crossbow. They fall under the same rules and regulations as the traditional bow and arrow.”

Hammond stated that he didn’t think the entire town was being overrun with deer.

“There are some areas where the deer population has increased,” he said, identifying the Mitchell-Moore property along the railroad track and the rear portion of the town’s recreational complex. “Those are the only two areas I can think of that may qualify for this.”

Buddy Jones, who serves as legal counsel to the Town of Ahoskie, said he has seen deer in his yard.

“They come on my patio and eat everything there they can find,” Copeland noted.

“This is something I can study further and bring additional information back to you,” Hammond said. “This will not happen this (hunting) season, it will perhaps be next year before we can put something in place if that’s the direction you want me to go on this.”

“If we do this we need to ensure public safety and control the areas where hunting can occur,” Mayor Linda Blackburn said. “We want to make sure these arrows are not being shot in the direction of a home.”

“We can control it, control who goes in and out of these areas to hunt, because they would have to apply for a bow hunting license to hunt inside our corporate limits,” Hammond said.

The Council approved Hammond to study the issue further and bring back his findings to the board.

In August, the Smithfield Town Council voted to allow bow-and-arrow deer hunting on private property during hunting season. Hunters will have to follow all state regulations, and they will have to shoot from eight-foot-tall stands and be at least 150 feet from property lines. Hunting will not be allowed on town property, where police were paid to hunt deer in years past. Also, hunters will need written permission from the property owner if they hunt on someone else’s land.

Officials with the Town of Burgaw also amended its municipal code in August to allow deer hunting by bow and arrow within its corporate limits. There, a hunter must pay a $25 fee to acquire a permit and provide proof to the Burgaw Chief of Police that he or she has obtained a valid hunting license.

This home off NC 42 near Colerain was hard hit by the April 16 tornado, one of two twisters that... read more