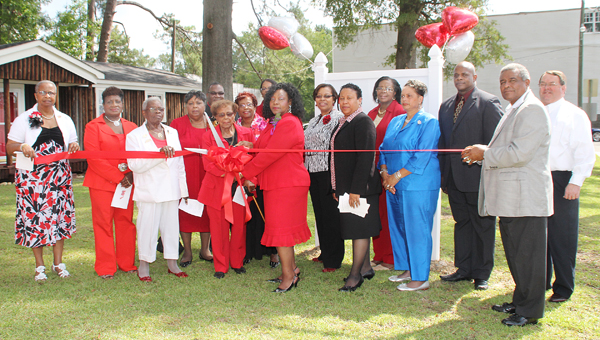 Taking part in the Sept. 9 ribbon cutting and grand opening of the DRCA headquarters were, front row from left, NC House Representative and DRCA Board member Annie W. Mobley, Board member Constance Richardson, Martha Thompson, President of the Ahoskie Alumnae Chapter of DST, Board Treasurer Jean Canada, Estella Simons, oldest member of the sorority, Board member Hilma Flood, Mary Harrell-Sessoms, President of the Board of Directors for DRCA, Board members Linda McNair-Moore, Assata K. Buffaloe, Viola Vaughan-Holland, Marilyn Chavis-Watford and Marshall Cherry, and Senator Edward Jones. On the back row, from left, are DRCA board members Ronald Roberson and Attorney Rosiland Grant along with Ahoskie Chamber of Commerce Executive Vice President Dan Joyner. Staff Photo by Cal Bryant

AHOSKIE – The effort was worth the wait.

After decades of searching for a permanent home, Deltas of the Roanoke Chowan Area, Inc. (DRCA) formally opened their headquarters on Sept. 9 during a ribbon-cutting ceremony and open house at 100/102 Rogers Street in Ahoskie.

DRCA is a non-profit corporation and part of the Ahoskie Alumnae Chapter of Delta Sigma Theta Sorority, Inc. The local Delta Chapter is very active in the local community, sponsoring several projects as well as its GEMS program, popular among local young ladies.

While their contributions to the local area are a source of pride, the fact they were homeless was not. Since receiving their charter in 1973, the local Deltas have searched for a place they could call their own.

“We have gathered for meetings in many different places over the years,” said current Ahoskie Alumni Chapter President Mary Harrell-Sessoms. “This is now a dream come true, one that first dreamed 38 years ago when our first president, now NC House Representative Annie Mobley, was heading up our Delta Alumni Chapter. For whatever reason that dream laid dormant for many, many years.”

During her first term as president in 2002, Harrell-Sessoms said it was her quest to revisit that dream. However, when her four-year term ended the dream was yet fulfilled.

“We were very fortunate for the presidents that came after me saw this as a vision that could be and they put me as the chairperson of the housing committee,” Harrell-Sessoms recalled. “Along with Viola Holland, Annie Mobley, Emma Johnson and Lilly White, we continued to look for property.

“We were in the process of building a house from the ground up when one of the members of the housing committee said to go back to the realtors to see if there was an existing house or building that would fit our needs,” she added. “We did just that. We contacted Joe Murray Realty and he told us of this particular piece of property and gave us a price. When we examined this property we found nothing was wrong. It was perfect. We were given the key and we are debt free.”

Over the summer months, Delta members had a roof installed, painted, put down new flooring and redecorated their new headquarters.

“Your financial support, your moral support and your prayers have got us to the point we are today as well as to those who gave of their free time this summer to make this day possible,” Harrell-Sessoms said.

“When I look out this morning at the sea of women dressed in red, I must say you are doing great things here. Women are leading our country now. I commend all of you for this house that women built. You had a vision, one you kept alive,” said State Senator Ed Jones.

Sorer President Martha Thompson informed the audience that Deltas consider themselves as pioneers.

“We have a vision for this community. When we have a vision, we stick to it. We are here and we are open to the community, not just to the Deltas,” Thompson said.

The purpose of DRCA is to implement, identify and foster ideals and programs for the benefit of the community.

WINTON – No. That was the simple response to a complex issue here Monday night when the Winton Town Commissioners... read more