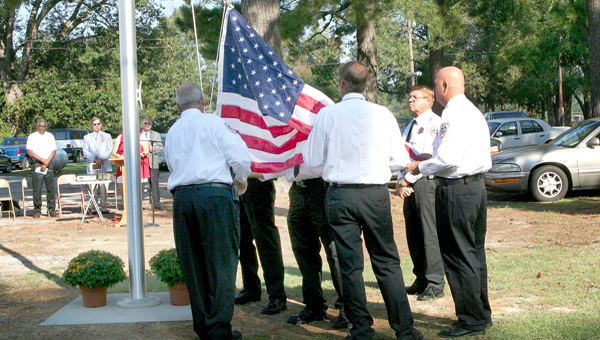 During Saturday morning’s 9-11-01 tribute, members of the Woodland Fire Department raise an American Flag as donated by Woodman of the World Lodge 862 of Murfreesboro. Staff Photo by Amanda VanDerBroek

WOODLAND — Hundreds of miles away from where the September 11th attacks took place, those in the community of Woodland gathered to remember 2,977 lives lost a decade ago.

On Saturday a crowd of approximately 20 gathered to take part in an honor and remembrance ceremony coordinated by Woodmen of the World at the Woodland Town Hall.

Sunday marked 10 years since the coordinated terrorist attacks on the World Trade Center in New York City, the Pentagon in Washington D.C. and near Shanksville, Pa. where hijacked Flight 93 crashed, never reaching its intended target because of passengers uprising.

“I think most of you here can remember, if you will reflect back to what happened on 9/11 on that morning, the very place you were on that particular morning,” Northampton County Sheriff Wardie Vincent said. “If you can do that then you have a real sense of camaraderie for this country.”

Vincent, who was the guest speaker, recalled being at work as the day’s tragic happenings unfolded. He remembered seeing the images on the television and not believing it was real.

“In a few seconds, in a few moments my whole perspective changed,” he said. “There was a sense of urgency I had not felt in a long time and that put us in a whole different perspective from that day, that moment, until now.”

Vincent spoke of the sense of invasion most Americans felt after the events, the changing role in law enforcement and the need, he felt as a military veteran, “to take up arms again.”

“I felt they had invaded our home area with no respect of one or another, and that was just unacceptable,” he said.

Vincent said in wake of the attacks the United States came out a stronger nation and it was up to everyone that similar events never happen again.

“We must pick up the banner and make sure this never happens in our country again,” he said. “We’ve got to spread the message to our young people that there is more to freedom than just being free, there is a cost.”

Northampton County Commission Vice Chair James Hester spoke of the brave actions of the rescue personnel on 9/11 and those who continue to run toward danger when summoned.

“I have a deep respect for the men who go into burning buildings,” he said. “We watched the firemen go in the buildings on 9/11 and many of them did not come out, they gave their lives and they did it willingly.”

Hester recalled the events of Pearl Harbor, his brothers’ service in World War II and the patriotism and the desire of Americans to do something, whether it be on the battlefields on foreign soil or on the home front. He said with 9/11 Americans were told to go home and to look out for terrorists and that’s what they did.

“Today, I think our sense of patriotism is the lowest that it has ever been in many years and we need to change that,” he said. “We need to remember why we’re here; we’re here to help one another; we’re here to look out for our neighbor; we’re here to think about our country and pray for our country, and to support our firemen, our police, our soldiers, who are putting their lives on the line so that you and I might be able to go to bed tonight without fear in our hearts.”

For many citizens at the ceremony 10 years may have passed, but the memories of 9/11’s events remained.

Pat Liverman said the tragedy made her more aware of what was beyond Woodland.

“I never thought of terrorists being out there,” she said. “I just thought of my little town where everything was running smoothly and then all of the sudden you have this explosion that just changes the world.”

As painful as the memories are, Liverman agreed they should be preserved to remind those future generations.

“It’s frightening, but it’s certainly a memory and I guess it takes those memories to keep it alive,” she said.

Woodland Fire Chief Cleve Bowen was proud to have a 9/11 ceremony to remember the thousands who perished.

“Three hundred and forty-three of them were our brothers,” he said of the New York City firemen who died that day. “It’s very important (to keep the memories alive) because that’s what motivates us knowing what they did. We do the same thing on a smaller scale, but the end result could be the same thing. That’s what keeps us motivated and makes us do what we do.”

Bowen said those firefighters that died on 9/11 were doing exactly what they were trained to do.

During the ceremony, Woodmen of the World, Lodge 862, Murfreesboro, donated a flag pole and a flag to the town. Members of the Woodland Volunteer Fire Department were presented the flag to place on the pole.

Sharon Britt, area manager with the Woodmen of the World, said the civic organization tries to make flag presentations as often as necessary. Since 2002, the Woodmen have been dedicating flagpoles not only to honor the 9/11 victims, but as a reminder of those in the U.S. military. Britt said approximately 4,500 flagpoles have been dedicated.

“The flag that you have flying today, if it becomes torn or tattered the least little bit, we want a phone call, we want to know, we want that flag to be flying proudly and without tarnish,” she said.

“I’m (proud) to have this flagpole and this ceremony today in reflection of 10 years ago when we lost so many lives,” he said.

Another honor and remembrance ceremony was also held on Saturday by the Woodmen of the World, Lodge 456, Seaboard. There town officials were also presented an American flag.

WOODLAND — Woodland EMS will return to volunteer status at the end of the month due to the municipal department... read more