Hunter stands one step away 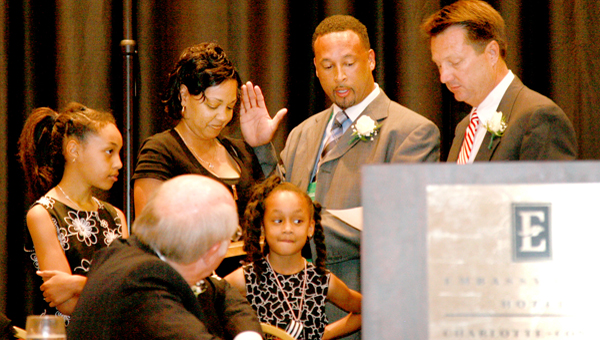 Howard J. Hunter III (second from right) receives the Oath of Office as President-Elect of the North Carolina Association of County Commissioners. He is joined by (from left) his daughter, Zaria, his wife, Wanda, and his daughter, Kayla. He is being sworn in by Twelfth Judicial District Superior Court Judge Jim Ammons. Contributed Photo

CONCORD – He’s moving on up.

During the 104th annual conference, Hunter was elected and sworn in as President-Elect of the NCACC. As President-Elect, Hunter will work closely with other members of the Association’s Executive Committee to guide the board of directors on legislative and administrative issues affecting counties.

“I cannot express how grateful I am to the people of the Association for their support,” Hunter said. “It’s been very humbling to seek such a high-level post and do so without opposition. It is an honor to receive that support from across the state.”

The eventual presidency will make Hunter just the third Hertford County man to ever serve in that capacity for the commissioner’s association. Long-time Hertford County Commissioner DuPont L. Davis served as President from 2002-2003 and Fred Jones served in the same capacity from 1965-1966.

“To be just the third person in Hertford County to serve will be very special to me,” Hunter said. “I wish my father (the late Rep. Howard J. Hunter Jr.) and DuPont were here to share it with me. They would have been proud.”

Hunter said his father was a mentor to him and Davis was especially helpful as he worked as a commissioner. He also was appreciative of the support and encouragement of former NCACC President Dr. Delilah Banks.

Hunter has already been serving with the executive board since his election as vice president. He said he enjoyed working with the association to help do what is in the best interest of the citizens.

Hunter said he appreciated the support he received not just from county’s citizens, but also from the other members of the Hertford County Commission. Those commissioners took time Tuesday to express their appreciation for Hunter.

“I’d like to say how proud we are of our fellow Commissioner, Howard Hunter,” Commission Chairman Johnnie R. Farmer said. “He has represented our county well at the state level and we appreciate all of his hard work.”

“A lot of time goes into being a commissioner,” Mitchell said. “For Commissioner Hunter to add to that time by serving at the state level is admirable. It is a tough thing to do, but he does it well.”

Hunter said his service would not be possible without the understanding and support of his wife, Wanda Hunter.

“She has been there the entire time and supported me when I wanted to seek office,” he said. “I couldn’t ask for more support.”

Hunter is in his second term as member of the Hertford County Board of Commissioners. He was elected NCACC Second Vice President in August 2010, and was appointed by the NCACC Board of Directors as First Vice President in December 2010. He served as an At-Large Appointee to the NCACC Board of Directors in 2008-09 and was twice appointed to the NCACC Legislative Goals Committee. He was also appointed in 2009 by Senate President Pro Tem Marc Basnight to the Joint Study Commission on Alcoholic Beverage Control, which examined the state’s ABC System and recommended changes that were adopted by the North Carolina General Assembly in 2010.

Hunter will automatically ascend to the role of President during the 2012 Annual Conference, which is scheduled for Aug. 16-19 in Wake County.

WINDSOR – Bertie scored like Chicago Democrats used to vote – early and often. The Falcons bounced back from their... read more