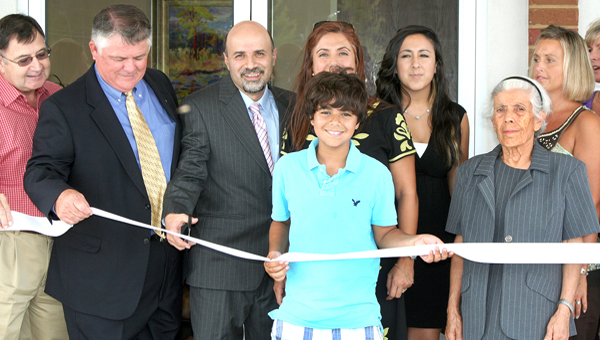 MILLENNIUM — More space is the right medicine for employees and patients at Aulander Medical Practice PA.

After years of practicing medicine out of a small office on Commerce Street in Aulander, Dr. Semaan El-Khoury along with his staff have moved into a state of the art building on Hollowell Road, off NC 11.

On Aug. 26, the new facility was dedicated with a ribbon cutting ceremony.

“Our old office was five rooms,” said Tori Spruill, a CNA at the medical practice. “It’s so nice; we don’t have to bump into each other anymore.”

The modern facility offers plenty of elbow room for both staff and patients with 4,500 square feet and 12 exam rooms. It also offers handicap accessibility and a larger lab.

Dr. Khoury came to area in 1996, working first with longtime Aulander physician Dr. Fred Saunders. Dr. Saunders, who began his medical practice in 1946, retired shortly thereafter, although he remained as a mentor and close ally for Khoury until 2004. Dr. Khoury began his private practice one year later.

“It’s a dream come true,” said Khoury about the new facility. “We needed to do it (for the increase of) new patients and also the equipment and computers. We had to grow. We had to do it for the sake of getting better and serving our patients.”

Despite the move from Aulander to the outskirts of the town, Kohury is confident the community support for his medical practice will remain as will his own dedication to those he serves.

“We’re not going anywhere, the continuity of care, all of us are dedicated in here,” he said.

Dr. Khoury thanked Bob Rowe Construction, the general contractor on the project, his staff for their dedication and his family for being supportive.