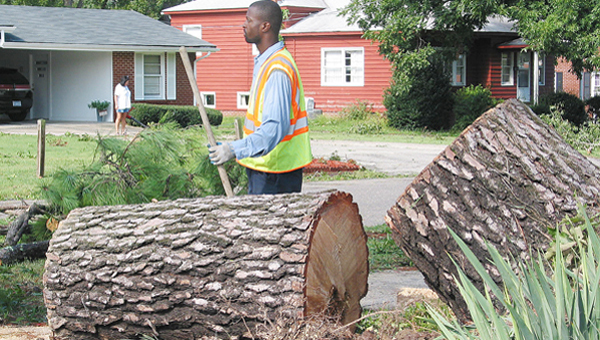 Town of Ahoskie workers are busy as they tackle the task of removing debris left in the wake of Hurricane Irene. Staff Photo by Michael Leonard

AHOSKIE – In the broad scope of Hurricane Irene’s impact on eastern ‘Carolina, the town of Ahoskie suffered minimal damage.

Ahoskie Town Manager Tony Hammond, in a Monday morning interview with the R-C News-Herald, said things could have been much worse.

“Compared to what I’m seeing and hearing from other towns and counties in our part of the state, Ahoskie was very fortunate,” Hammond said. “We fared well when compared to other places.”

While an assessment of total damage is pending, Hammond said there were 10 fairly large trees, plus numerous smaller ones, toppled by the hurricane’s winds. As of late Sunday afternoon, two large trees we’re still blocking a portion of Albemarle Drive.

“Both those trees were entangled in power lines; we’re waiting on the power company to take care of that problem area,” Hammond said.

A few homes and outbuildings within the town’s limits suffered structural damage. Electrical service has been restored to the majority of homes and businesses in Ahoskie. Hammond said there were a few “spotty outages” basically due to power lines still entangled in downed trees.

Flooding was also a problem. Many of the town’s streets were under water on Saturday into early Sunday. Now, all those streets are clear of standing water.

The Ahoskie Creek did flood its banks. It spilled over into the Ahoskie Creek Recreational Park, but no damage was reported there. The creek level was at 10.72 feet at 9:30 a.m. Monday. It was as high as 10.97 feet on Sunday.

Town property was affected at the park located next to the Rec Center on West Main Street where a large tree fell on playground equipment. Hammond said damages there are in the $2,000 range. Also, a tree at Pinegate Apartments fell and damaged approximately 50 feet of fencing at the town’s tennis court across from the Rec Center.

Hammond said the town has decided to take on the task of collecting storm debris.

“We will not hire an outside contractor to do the work, we’re going to do it ourselves,” Hammond stated.

Those with storm debris are asked to take it to the corner of their property (not in the street or within the curb). Tree branches need to be cut into manageable pieces (4’ or less) and tree trunks need to be in sections of 2-to-3 feet.

“We will clear any compromised trees that are in or threatening a road if they are not entangled in a power line,” Hammond said. “We will not go onto private property to clear a downed tree. Citizens need to take care of that themselves or hire a contractor to do the work.”

Tree damage from Hurricane Irene is noted throughout the Town of Murfreesboro, including this one on Spring Avenue. Staff Photo... read more