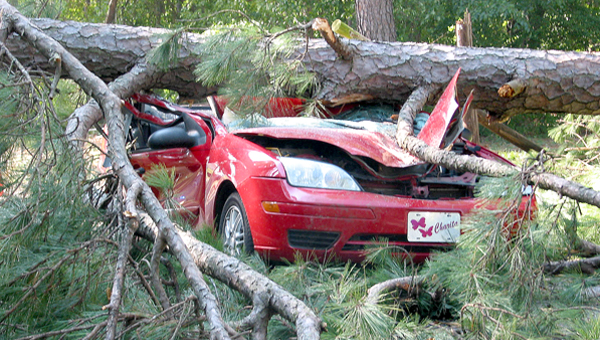 Miraculously, no one was injured when this vehicle, after missing the warning cones, drove head on into this tree that was toppled Saturday afternoon by Hurricane Irene across a section of NC 561 near Forest Drive in Ahoskie. The accident occurred around 2 a.m. Sunday, well after a county and town curfew due to the storm. Staff Photo by Michael Leonard

AHOSKIE – It wasn’t as bad as Isabel in October of 2003, but yet another hurricane has left Ahoskie residents with the chore of cleaning up a big mess.

The area just west of Academy Street appeared particularly hard hit, with several big trees down and significant debris blown on rooftops, in yards and across streets. Town of Ahoskie employees were working mid-morning Sunday with a dump truck and clamp lift to remove a large pine tree at the corner of West Main and Curtis streets.

Rachel Davis of Ahoskie was up with her granddaughter, Maddie Joyner, at 2 a.m. Sunday when she noticed rescue lights outside her home at the corner of NC Highway 561 West and Forest Drive. A large tree had fallen across the road at about 5 Saturday afternoon and a car, out after curfew early Sunday morning, had somehow missed the orange cones blocking off the site and driven into the tree. The hood was wedged Sunday beneath the trunk about halfway up.

“Nobody looked too excited out there, so I figured there were either not very hurt or dead,” Daniels said of the scene.

Ahoskie police officer Jessie Mizelle said no one was hurt.

Pat Daniels of Pembroke Avenue, Ahoskie, reflected on previous hurricanes Sunday as she raked fallen twigs and leaves into a pile.

“I was telling my neighbor that if it had to come, this wasn’t that bad,” she said. “We have been here a long time and have gone through Isabel, Floyd, Fay, Earl, Dennis and a bunch of others. Well, we’re still standing.”

Residents on Byrd Street in Windsor begin the process of cleaning up Sunday. People all over Bertie County were out... read more