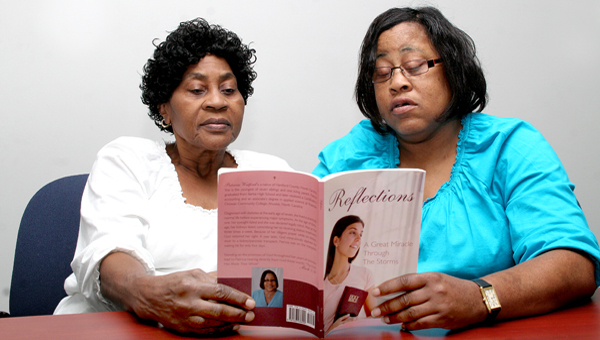 Patricia Watford (right) is joined by her mother, Zenora, as they view a copy of Watford’s recently released book of poetry – “Reflections: A Great Miracle Through the Storms.” Staff Photo by Cal Bryant

AHOSKIE – Thirteen years removed from a double transplant operation that saved her life, Patricia Watford of Ahoskie has decided to share her feelings through words.

After a life full of medical problems, Watford’s life took a dramatic turn in March of 1998 when an 11-hour operation successfully replaced a kidney and pancreas. Both organs needed to be replaced due to complications from childhood diabetes.

Since the 1998 operation, Watford’s new kidney works and she no longer has to have dialysis and her new pancreas has cured her diabetes.

Other than being a walking miracle, Watford has now added a new title to her life-long journey, a published author. She recently released a book of poetry – “Reflections: A Great Miracle Through the Storms.”

“These poems touch every phase of my life,” Watford said. “I wrote the book because I feel there others in my shoes that are in need of encouragement. The poems were my release…the Lord was my release, he was the answer to all my problems.”

The poetry, which fills 116 pages, is set in chronological order, beginning in 1984 through the present. Watford said her favorite can be found on page 47 (My Faith Has Made Me Whole) where she writes, “Through many years of needles and pricking fingers every day, something inside kept telling me the Lord will make a way. The passing out at night, lying close to death, how the Lord saw fit to send someone to find me and help.”

That “help” has allowed Watford to experience no serious complications in the aftermath of the double transplant.

“I’m still on medication and my doctors keep reminding me to watch closely what I eat,” she noted.

Watford works as a substitute teacher for Bertie and Hertford County public schools. This past June she became a volunteer at Roanoke-Chowan Hospital.

“I really enjoy the volunteer work at the hospital, they put me in the surgical waiting room where I’m able to offer comfort to anxious family members by sharing my story,” she said.

The life she currently leads is a far cry from years of suffering since she was first diagnosed with Juvenile Diabetes. Before getting her new organs, Watford suffered renal failure and went legally blind because of the diabetes doctors believe she had from birth, though it wasn’t diagnosed until she was seven.

Throughout her life, Watford has loved to the arts. The blindness impaired her ability to read and appreciate paintings, but she never stopped singing.

She can now see much better thanks to several surgeries and, as she says, the grace of God.

Zenora not only cites her daughter’s sight returning, her diabetes cure and her working kidney, but also the many times she thought Patricia would die.

“Before her operation,” Zenora said, “I had found her in comas many times. It was really touch and go, but after the surgery, everything got just about right.”

“I wanted to do so many things with my life back then….drive a school bus; join the military, but my medical condition wouldn’t allow that to happen,” Patricia said. “I did eventually land a job at the Perdue plant in Lewiston, but my doctor told me to quit due to my medical condition.”

She eventually made her way to Connecticut, working there for a year in a department store before her medical problems grew worse, forcing her to return home.

Ahoskie physician Dr. Brian P. Magrane recommended Patricia for a kidney/pancreas transplant in 1997. She was first tasked by the non-profit Organ Transplant Fund to raise $18,000 to get on the transplant list. Thanks to the effort of numerous individuals, she eventually raised $30,000.

When she was finally put on the list for transplantation, Watford only had to wait four days before the call came that a donor had been found.

Medicaid wouldn’t pay for the pancreas transplant because it was considered experimental at the time, but her chief surgeon, Dr. Randy Bollinger with Duke University Medical Center, insisted, “If you’re going to solve the problem, solve the whole problem,” Patricia said.

For Patricia, the experience was invaluable, not just because it saved her life, but because of all the wonderful people she met along the way.

“I got to meet a lot of people,” she said. “It was a great experience, but I wouldn’t want to go through it again.”

Following the surgery, Patricia met many other transplant patients. “Once you get that sick, you realize you’re not the only one,” she said.

She has a few words of advice to those currently experiencing medical problems.

“Don’t give up hope; God has the last say in everything, he has his hand in everything. I was walking death before the transplant,” she concluded.

Watford, whose pen name for the book is Patty P, will hold a book signing from 1-3 p.m. on Saturday, Sept. 3 at the Ahoskie Bojangles. Copies of her book will be sold at that event or can be purchased at Barnes & Nobles, the Author House website or at www.amazon.com.

Most games moved to Thursday

Most of the Roanoke-Chowan region’s football teams will be playing Thursday this week in preparation for the anticipated arrival of... read more